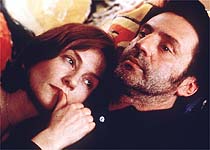 Early in La Separation, our hero and heroine are at the movies together. There is a long tradition of movie directors making reference to other films and, when they do, students, attention should be paid.

In this case, the film within the film is Roberto Rossellini’s pretty well forgotten Europa ’51, starring Ingrid Bergman. At the time Europa ’51 was made, Bergman had left her husband, was living with Rossellini, and had borne him a child out of wedlock. (It was one of the great scandals of the era, incurring opprobrium on the floor of the United States Senate. But we digress.) In Europa ’51, Bergman and her screen husband lose a child and have a marriage plagued by misunderstanding and miscommunication.

Both Bergman/Rossellini and the fictional characters on screen resonate for the couple in La Separation. Even as they watch the film, he affectionately reaches for her hand and she somewhat testily withdraws. In another early scene, she turns away from his kiss when they are parting. She finds it impossible to look him in the eye. What follows is the gradual unfolding of the deterioration of their relationship, elegantly told through a series of ordinary pieces of behavior, conversations that don’t connect, retreats to friends, tempers lost.

The PR material for this movie says that the couple have been married for several years and many critics have referred to them as a married couple. Perhaps they, like the critic seated next to me at the screening, slept through this fine film? The comment from the seat next to mine at the end: "I didn’t find that very compelling, did you?"

Well, yes I did, as a matter of fact, and I had no trouble staying awake. I was fascinated by the extraordinarily canny skills of observation demonstrated by the writers, the director, and, of course, the stars, Isabelle Huppert and Daniel Auteuil, two of France’s gifts to the contemporary cinema. Many have noted their superb performances here, but not enough credit has been given to Christian Vincent. This was Vincent’s third film, in all cases as writer-director. Performances such as these are not created by actors in a vacuum. Even the best actors give terrific performances only when under skilled direction.

Early in the film, the Autueil character is videotaping their 18 month old son, trying to capture and hold on to something that he intuits, somehow, may not stay constant in his life. As the relationship slips into further disarray, Huppert sees a lawyer who assures her that as the mother of a child born out of wedlock, she has virtually all the legal rights. The little boy and their feelings for him play into the complexities of their feelings for each other and the future of their relationship.

I thought this film was real, I cared about these people, and there is such a richness of perfectly observed detail that I suspect a second viewing would be well rewarded. It is very much in the genre of films that the French do so well: a lot of talking, a few carefully drawn characters, an exploration in depth of what happens between people when they love and when love fails.

A further thought. This film was made in 1994. It has taken four years to find distribution in the United States, and that distribution, of course, will be limited to a handful of art houses in the bigger cities where it will play for a week, maybe two, and then disappear. The immediate thought is that if you like this kind of civilized work, catch it while you can. The more serious thought, for your respectful CV, is that there seem to be ever more limited numbers of foreign films gaining distributorship in this country. Those that do are given scanty promotion and short runs, thereby never really getting a chance to find their audience.

Alas, the long run effect will be a steady diet of intellectual sewage like There’s Something About Mary or Bride of Chucky.