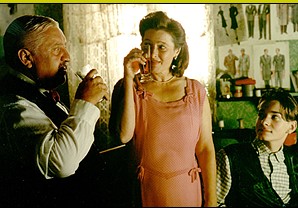 A doctor blows cigar smoke down the throat of a boy choking on a berry and miraculously saves his life. The widow of a clockmaker–so passionate that only the most sturdy flowers survive in her garden–promises a soldier a gift of a pocket watch if he can make love to her for an hour. An itinerant beggar, trapped in an outhouse by a cruel farmer, survives by desperate means–and the ignorance of his oppressors.

Landscape, a film from the Slovak Republic, doesn’t name where it takes place, thus avoiding questions of nationality, but its events place it geographically in eastern Europe and its humanity is universal. A series of short episodes about rural and small-town people is interleaved with black-and-white segments (a home-movie, mock newsreels) that provide some time and historical perspectives.

In one of the latter, a van drives through the deserted streets of a town with its loudspeaker blaring precise and detailed instructions for the evacuation of the Jews. Director Martin Sulik, who also co-wrote the screenplay, thus conveys with an inventively spare image the horror of an age. A later black-and-white segment focuses on Communist anti-Vatican propaganda. Through these segments a timeline is drawn covering the middle of the twentieth century.

Shifting back and forth between the macrocosm of European history and the microcosm of the lives of ordinary people, Sulik achieves a resonant portrait of a place in human terms. The tales are filmed in warm golden tones (until the final, bleak, wintry story where the white of snow predominates, with pinpoints of color provided by exotic birds). But Sulik nether deals in sentiment nor falsely romanticizes his subjects. These peasants are a gritty crew, like genuinely obnoxious Silbert, who breaks his mother’s crockery until she gives him the money he wants for liquor. When he comes back drunk, he orders her, "Sing to me or I’ll put you in the stove!" There are an unlikable pair of mischievous brothers who loathe their crippled father and a tailor who tries to collect his fee in sexual favors.

In the World War II episode, history takes its toll on the locals as their town is sequentially overrun by soldiers–the Hungarians, the Germans, the Russians. And in a profoundly sad moment after the war, the doctor who years earlier saved a boy’s life, is encountered by the verger in a cemetery, wearing the Star of David on his coat. "Where have you been," the verger asks. "Elsewhere," the doctor replies, "We were like a traveling theatre company, hissed off the stage everywhere."

For an episodic structure of varied stories to work well, characterization must be established with great economy. Sulik elicits skilled performances from his large cast so that each story generates superbly realized individuals. Even when he delves lightly into the fantastical/magical (a snake slides down a sleeping man’s throat, for example), it is the power of the underlying humanity that breathes life into these tales. Loneliness is a recurrent theme here as well, and the overall tone is bittersweet. Sulik tells just enough, leaving room for intentional ambiguities that enhance the textured richness of his stories. Landscape is what remains constant as history sweeps through it and as its population sadly dwindles over time.

(36918)
$5.91 (as of January 22, 2021 - More infoProduct prices and availability are accurate as of the date/time indicated and are subject to change. Any price and availability information displayed on [relevant Amazon Site(s), as applicable] at the time of purchase will apply to the purchase of this product.)

(20574)
$7.99 (as of January 22, 2021 - More infoProduct prices and availability are accurate as of the date/time indicated and are subject to change. Any price and availability information displayed on [relevant Amazon Site(s), as applicable] at the time of purchase will apply to the purchase of this product.)

(15678)
$3.14 (as of January 22, 2021 - More infoProduct prices and availability are accurate as of the date/time indicated and are subject to change. Any price and availability information displayed on [relevant Amazon Site(s), as applicable] at the time of purchase will apply to the purchase of this product.)
related posts