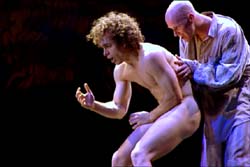 Mirra Bank&#146;s film, Last Dance, documents a collaboration between Pilobolus Dance Theatre and well-known children&#146;s book illustrator, Maurice Sendak. It offers a fascinating look into the creative process. More like a war story than a backstage peek, the competing wills of the three participating choreographers along with the even more well-known and equally opinionated Sendak amount to the kind of battlefield tension that audiences never get a hint of from their velvet chairs. The final product, "A Selection," is a gripping dance-theatre piece based on a Holocaust idea. But the film makes it clear that the real human drama is in the process of getting to the stage.

Given unlimited access to the rehearsal process, Banks writes in a director&#146;s statement that the editing process (she had over 125 hours of footage) offered her the opportunity to distill a "dramatic, rather than literal truth." No stranger to theatrical endeavors, Sendak&#146;s mission, from the outset was to come up with some kind of narrative, using the contributions of three choreographers and six amazing dancers, based loosely on the children of the fake concentration camp Theresienstadt, with music by Holocaust victim, Hans Krasa.

Pilobolus, on the other hand, hadrarely worked in a narrative form, and usually chose music after the dance had already been set. Founded as a communal art project by three Dartmouth College students, Jonathan Wolken, Robby Barnett and Michael Tracy, along with their teacher, Alison Chase, in 1971, the group has gone on to become a world renowned dance company known for its unusual use of the human form, and for its playful theatricality.

Working with Sendak was a challenge that the Pilobolus members hoped would give them a shot of freshening after so many years as a collaborative unit. (Chase did not participate in the project.) They claimed to be up for the assignment, but what Bank captured on tape was the battle that actually occurred when the passions of all the participants involved converged. The fact that a final product actually emerged (The New York Times called it, "riveting…(with) stunning dramatic edge"), seems almost miraculous based on the scenes of tension and conflict depicted by Bank.