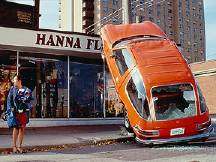 Last Night sounds like the name of a 20-something sex comedy, but the title of writer-director Don McKellar&#146;s film is meant to be taken literally. Set in present-day Toronto, Last Night covers the last six hours on Earth before some natural cataclysm sweeps all life from the face of the planet.

We never learn the exact nature of the threat, but it seems to be coming from up above. (The characters tend to let their gazes drift upward whenever they contemplate what&#146;s going on, and a state of perpetual daylight has fallen over the land.) All hope of salvation has been satisfactorily laid to rest before the movie begins (no nuke-laden astronauts are going to make the problem go away), so McKellar can focus on how his disparate characters respond to the knowledge that their time &#150; that everyone&#146;s time &#150; has come. The few peripheral figures with any anger left in them have formed ragtag bands that sweep through the city streets committing mindless acts of vandalism and violence, but Last Night doesn&#146;t care about them or their quotidian brand of nihilism. Instead it&#146;s concerned with a handful of common characters &#150; "the rest of us suckers" &#150; who have to decide how to spend the final hours of their lives.

Patrick (McKellar) wants to face the end alone in his apartment. His friend, Craig (Callum Keith Rennie), is intent on living out a compulsively detailed sexual wish-list. Sandra (Sandra Oh) has plans to commit suicide with her husband, but she&#146;s stuck across town from him and may not make it home in time to keep her end of the deal. Duncan (played by director David Cronenberg) is a gas company employee who conscientiously calls each of his customers to assure them that their utility service will continue uninterrupted until the final disaster. Patrick&#146;s mother (Roberta Maxwell) masks her desperation by insisting that the family hold a mock-Christmas dinner. Her husband (Robin Gammel) goes along with her out of devotion.

Last Night&#146;s characters don&#146;t follow the Hollywood norm for these types of affairs. They don&#146;t launch into little speeches that artificially sum up their lives; they don&#146;t tear at their hair or declaim about the unfairness of it all. On the contrary, they&#146;re mostly civil and quite sane considering the dilemma they&#146;re in. They still have it in them to irritate each other, but because they get the Big Picture, they do their best to be kindly in their little remaining time. And even though it&#146;s the last day of their lives, they can&#146;t help screwing up each other&#146;s plans just because they&#146;re human. Mostly they fall into situations &#150; a discussion about Pete Seeger&#146;s politics, giving aid to a stranded stranger, screwing their high school French teacher &#150; that appear insane in the context of when they&#146;re occurring, but which reveal these people for what they are.

McKellar fills in the background of his story with some funny and canny details. The DJ of the local radio station plays his favorite pop tunes in reverse order, all the while happily assuring his listeners, "We&#146;ll be with you to the very end." A small mob purposefully carries a large statue down the street, and it&#146;s unclear whether it&#146;s a keepsake or a battering ram. And when Sandra finds her trashed auto on a deserted street, the perky little bell that chimes as she opens the front door is a bittersweet joke: it&#146;s one of those thinly reassuring touchstones of normality, now failing miserably at its task.

McKellar wants us to understand that human life derives its preciousness less from any inherent grace than from its connections to other lives, other people. As the finale approaches, the ineffable sadness of the end of the world begins to work on you as a notion. It brings into relief the transitory and fragile nature of relationships, and causes us to feel a special sense of rue for the ones we neglect.

Last Night accomplishes all this in spite of itself for it&#146;s marred by a number of flaws &#150; most of them rookie mistakes. As a screenwriter, McKellar&#146;s thinking can be too pat. For instance, he makes the classic mistake of thinking that cynicism is always rooted in sorrow and loss, so he throws in a spurious backstory about Patrick being a widower long after we&#146;ve accepted his bitterness on its own terms. McKellar with his the flashing eyes and quickened speech patterns could make a convincing full-blown cynic, but his Patrick is conventionally conceived.

At least Patrick is a conception, even if a false one. Other characters, especially some of Patrick&#146;s family members, aren&#146;t conceived at all. Sarah Polley fans, in particular, may want their money back &#150; as Patrick&#146;s sister, she&#146;s given a nothing part. Genevieve Bujold as the French teacher has one smashing scene (she forces Patrick to stand still in the middle of this hectic day and explain to her &#150; in French &#150; what he does for a living), but after that she&#146;s only asked to lend the film a high-toned wistfulness. (Not giving actors like Bujold and Polley enough to do should be some kind of crime.)

It would also be nice if McKellar required a little more discipline from his actors. Oh, in particular, is amateurish in her early scenes, overstating her consternation by flapping her hands about like a ditz. (Oddly, she&#146;s much more effective in her later, infinitely more demanding scenes than she is at the early simple stuff.) Similarly, McKellar could have taken control of some sequences that don&#146;t add up to anything. One of them involves a gaga woman and her daughter sitting on an otherwise empty bus for the first half of the movie. We see them once or twice, but nothing happens to them until some vandals tip the bus over, and then that&#146;s it: we never see or hear from them again. And a scene where Patrick lashes out at his sister&#146;s boyfriend doesn&#146;t make sense on any level because we know Patrick, whatever his stress level, is simply too intelligent to misconstrue the boyfriend in quite the way he does.

These are some fairly serious flaws, yet even in combination they can&#146;t quite sink Last Night. More ambitious films have been laid low by lesser faults, but the bottom line is that Last Night simply works. Maybe it&#146;s McKellar&#146;s overall sincerity that pulls the movie through, or the no-frills but convincing execution of the central idea. Or maybe it&#146;s the purity of the movie&#146;s heart, best expressed in a shot that comes near the end as two of the characters find themselves bound together by the double helix of their own emotions, and sit waiting for the end of the world.