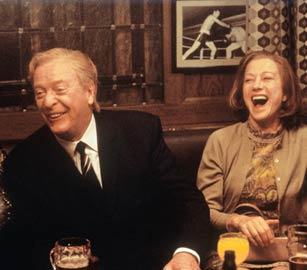 Last Orders has a lot in common with Robert Altman&#146;s latest, Gosford Park. Both feature an all-star cast of Brits as an assemblage of characters reacting to the death of one amongst them, and each character harbors some deep dark secret. The main difference is that Gosford Park manages to make several of its characters interesting whereas Last Orders fails on virtually every count.

Last Orders opens in a London bar with senior citizens Vic (Tom Courtenay), Lenny (David Hemmings), and Ray (Bob Hoskins) lamenting the death of their old friend, Jack (Michael Caine), who has left them with some &#147;last orders&#148; to scatter his ashes into the sea at Margate, a town of some nostalgia for Jack. Jack&#146;s son, middle-aged Vince (Ray Winstone) takes a Mercedes from his used-car dealership to drive his father&#146;s friends to honor his last request. At the same time, Jack&#146;s widow, Amy (Helen Mirren), goes to visit their daughter, June (Laura Morelli), whom Jack had for all intents and purposes disowned because of her mental retardation. This is the set-up that occasions multiple flashbacks by each of the characters showing their relationships to Jack and to one another.

Writer, director, and producer Fred Schepisi, however, has decided that today&#146;s postmodernism demands pastiche instead of conventional storytelling and so fragments the flashbacks into as many little pieces as possible. This does not make it difficult to put them back together and make sense of them. It does however render the movie into a series of annoying snapshots &#150; scenes that just lie there in tiny snippets and never build up into something greater than its parts. Last Orders finally has the effect of looking at a stranger&#146;s photo album. You are sure there are probably interesting stories behind the pictures, but you do not have the familiarity of context to appreciate them.

So we constantly jump around in time &#150; a conversation between Ray and Amy on a park bench only days ago, Vince&#146;s childhood when he was seven, hospital-ridden Jack trying to help Amy financially by getting Ray to bet on a long shot at the race track several weeks ago, Ray&#146;s daughter running off with a boy to Australia in the 1960s, Vince&#146;s childhood when he was eleven, Jack and Amy&#146;s first meeting, Vince as a young man wanting to leave the family business, Jack and Ray in the army during the second World War. All this is intercut with the gang&#146;s trip to fulfill Jack&#146;s last orders. These snatches of their lives are just that, and snatches do not tell a story. Some movies make ordinary life look extraordinary. Last Orders manages to show life in all of its banality when the intention is quite the opposite.

Because of the lack of narrative flow or interesting character arcs, the viewer is left to nitpick little things like how the characters appear over the ages. With the sole exception of Michael Caine and JJ Feild (no, that is not a misspelling), none of the actors look like each other between their older and younger selves. And when going back only a decade or two in time, these nearly bald men don the most preposterously phony wigs. Kelly Reilly, playing the young Amy, has a bland beauty which does not show any sign of turning into the distinctive face of Helen Mirren, which is made all the more apparent when one thinks back to what Mirren looked like in her twenties in movies such as O Lucky Man!.

Mirren is actually the saving grace in Last Orders. Out of the entire formidable cast hampered by the writing and story structure, she makes the most of little details and moments. Every movement is perfectly natural in the way she completely inhabits Amy, a faultless housewife worn down over the years by a daughter incapable of recognizing her. Mirren is a smart, smart actor in total control of her face and body. She is also as beautiful now at age fifty-six as she was thirty years ago. Never a conventional beauty, Mirren&#146;s rectangular face, prominent nose, spare lips, and understanding eyes are visually compelling beyond porcelain skin and perfect symmetry. If there is any one great reason to see Last Orders, it is for Mirren, who gives one of the best performances of the year.