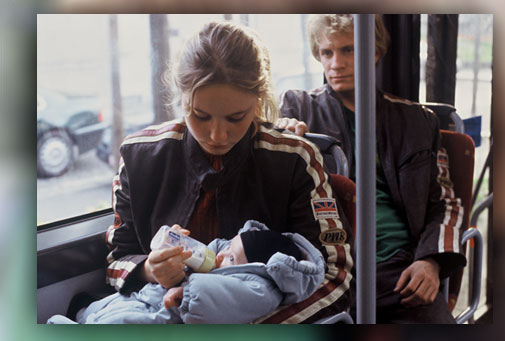 Taking the measure of human relationships: an interview with Jean-Pierre Dardenne and Luc Dardenne

An article from Cineaste

While the title of the new Dardenne brothers&#146; movie, L&#146;Enfant, ostensibly refers to the newborn in the picture, the father is the title&#146;s metaphorical child. Bruno (Jeremie Renier, Brotherhood of the Wolf) is an exuberant young man with dirty blond hair whose general appearance is more than a touch on the scruffy side. He sells stolen goods obtained from fourteen-year-old Steve (Jeremie Segard) and shamelessly panhandles (sometimes while smoking a cigarette). Bruno and Sonia (Deborah Francois in her film debut), a fierce 18-year old blond, have just had a child. With baby Jimmy in hand, Sonia returns to her apartment only to find that Bruno has sublet it to someone while she was in the hospital.

Bruno&#146;s callousness is not intentional but incidental to his mindset of everything being business, but when it comes to business, he is always fair-minded. He is honest with Steve and never filches on him. Sonia&#146;s love for Bruno and her own youthful imprudence make it easy for her to forgive Bruno his faults. Their playful moments together, physical teasing belying even their young age, show why she remains with him. Bruno lives day by day, but is unselfish and carefree with money. He casually rents a convertible to take the family out for an afternoon and buys Sonia an expensive jacket. Then one day, almost arbitrarily, Bruno gets the idea of selling Jimmy and nets 5,000 black market Euros for him.

L&#146;Enfant&#146;s major flaw is that it does not present any convincing evidence that Bruno is either so dense or so uncaring as to be remotely capable of selling his son on a whim. And the Dardennes have readily available reasons to motivate him &#150; the time-consuming responsibilities of raising a child (instead this child comes off as the quietest newborn ever put on film), stress and nagging from an inexperienced mother, the financial costs overwhelming his means &#150; but none of this is addressed. This being the movie&#146;s central premise, its lack of plausibility leaves an air of contrivance to the whole affair. Have the Dardennes ever been around a newborn?

Still, given this premise, a whole host of easy and trite expectations come along with it and to the Dardennes&#146; credit, the movie goes into wholly unexpected places. When Bruno and Sonia have their confrontation over Jimmy&#146;s disappearance, Sonia&#146;s reaction takes a different track from the usual hysterical meltdown. In a subsequent fight, the two don&#146;t have the maturity to communicate verbally, and it&#146;s an extraordinary scene of brutal, raw emotionality even though the two barely touch each other.

Jeremie Renier has come a long way since playing the lanky kid with a conscience in the Dardennes&#146; first fictional feature, La Promesse, and he retains the essential decency he had in that film that makes his character&#146;s transgression here all the harder to believe. In all other ways though, he is a wonderful asset to L&#146;Enfant and a welcome change from the Vincent Gallo-type malcontent. Deborah Francois is equally terrific in providing a physical, down-to-earth performance. She has star-presence written all over her.

The Dardennes have backed off from the dizzying handheld camera style of The Son, in which the audience spent half the movie looking at the back of Olivier Gourmet&#146;s head. Still, that movie was thematically stronger and more cohesive than L&#146;Enfant, and La Promesse more so still. Despite winning Cannes&#146; Palme d&#146;Or for both Rosetta and L&#146;Enfant, one has to wonder how much longer the brothers can fruitfully milk their working-class-folks-finding-themselves-in-existential-moral-quandary stories.