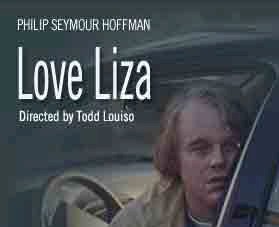 Actor Todd Louiso debuts as director with the strange, haunting, and ultimately frustrating Love Liza. Starring the ever more brilliant Philip Seymour Hoffman, the film follows Wilson Joel, a young man processing his grief after the out-of-the-blue suicide of his wife. Wilson discovers a suicide note, but cannot bring himself to open it. Whether he will do so or not and what the note might say provides the slim (and only) narrative momentum in the film.

Rather, this is an episodic series of scenes in which Wilson, paralyzed by his grief, acts out in various, largely childlike, ways.He starts sniffing gasoline, putting himself into a constant fuzzy high as well as echoing the suicide of his wife by carbon monoxide poisoning. The need for the gasoline leads him to the world of remote controlled models (airplanes, boats) where he seems to get some diversion, though he never actually participates himself. It’s as if he were fixating on a new interest to blot out the tragedy that has overwhelmed him. At a model boat competition, Wilson, on impulse, takes a swim in the lake where the boats are being raced, breaking the rules and interfering in the proceedings; he seems oblivious to even the simplest proprieties of social behavior.

His mother-in-law, Mary Ann (Kathy Bates), is mourning as well, but the two seem at odds rather than finding mutual support. There’s a fine shot of Bates reflected in a window that separates her from Hoffman, seen inside the glass; they see each other but are kept divided by the transparent barrier. Bates wants him to open the letter, but he refuses, fearful of what it might say. "I loved well!" he protests to Bates, "I don’t want a letter!"

Wilson sleeps on the floor, perhaps not wanting to return to the bed he shared with his wife. He laughs hysterically at an office joke, long after everyone else stops laughing. And he gets ever deeper into the gas, ever further from responsible or even rational behavior. What comes from outside does nothing to lessen his pain. At dinner with a couple of friends in a restaurant, the wife spontaneously starts weeping. He brings a pot of flowers to his wife’s grave, but the ground is uneven and the pot keeps falling over. The glove compartment in his car won’t close; like his mourning, it insists on remaining open.

There is, ultimately, a dramatic but highly ambiguous closing to the story. It could signify that Wilson has finally put the past behind him and is now ready to start anew, but it takes the form of such inappropriate behavior that there is a suggestion that he hasn’t come out of it at all, that he is permanently damaged. There’s insight in that ambiguity, but the message on screen is more apt to confuse and frustrate than enlighten. The image simply doesn’t work both ways.

Hoffman carries the film, onscreen almost the entire time. He seems to live this misery, wearing it on his face and in his carriage. Bates doesn’t have a great deal to do and their relationship is also rather muddily defined. The film is placed "somewhere in the midwest," but it doesn’t ever develop a sense of place; the "place" is really inside of Wilson’s head. For all it’s episodic structure and too often vaguely defined points, Love Liza sticks in the mind. It’s a promising start for Todd Louiso.