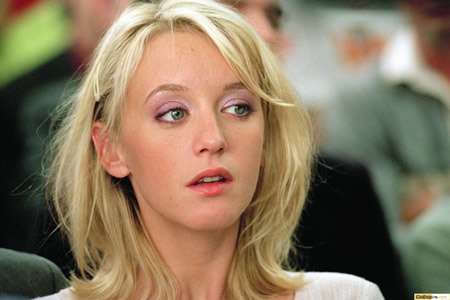 Here in the United States, the name Ludivine Sagnier may not elicit much recognition from anyone other than young girls who identified with her when she played Tinkerbelle in P.J. Hogan’s 2003 adaptation of Peter Pan; or perhaps those older than eleven who saw her the same year, often partially nude, in Francois Ozon’s hit thriller Swimming Pool. In her native France, however, it’s a different story.

Ludivine Sagnier is not only one of a new generation of French cinema’s rising stars; she has an impressively diverse resume for one so young. If you study the choices she has made so far in her career, which already spans almost a decade and over twenty films for the 29-year-old actress, you can discern a pattern that many of the best French actresses have followed. Indeed, the diversity of roles and genres, and the fact that she gravitates towards top-notch directors, makes it easy to imagine Miss Sagnier as the next Isabelle Huppert. And just to argue the possibility, Miss Sagnier’s latest film to cross the Atlantic is A Girl Cut in Two by France’s most famous living director, Claude Chabrol. Years ago, the role easily could have gone to Miss Huppert, herself a longtime collaborator of Chabrol’s.

“If I have an image, in France anyway, it would be of an actress who only works with brainy directors, and who only does intelligent movies, and who spits on the commercial movies,” Miss Sagnier admitted in her delectable French accent during an interview to promote A Girl Cut in Two, which screened at the San Francisco International Film Festival in May. (The film opened in theaters around the country in August. CultureVulture’s review is at http://Culturevulture.net/Movies/girlcutintwo_9-08.htm.) The actress expressed a simple philosophy behind her career path: “I want to be proud of my resumé.” It was clear she was proud of working with Chabrol. “I felt like I was suddenly printing my name in the history book,” she remarked, “because Chabrol is such a monument.”

Miss Sagnier’s conveys a plain, no-nonsense delivery and a sharp intelligence in conversation. She actually appears quite self-assured for one so tiny when you see her in person, and with such tiny feet, too. Despite the confidence and the obvious sex appeal (a bit subdued on this morning meeting) that this sloe-eyed blonde with the lovely silhouette exudes, her petite frame and the slight quaver in her voice suggests a certain fragility. She may be a star, with all the power that entails, but in person, she seems like any ordinary young woman who could get swallowed up by the weight of the world. She even admitted the dichotomy within herself, a trait she said she shares with her character, Gabrielle Deneige, in A Girl Cut in Two.

“It is a very rich analysis of the two pieces that you have inside you,” she said of the film. “Gabrielle and I are similar; I must say that I’m an ambitious person, not elbowing in order to succeed, [yet] still I think I’m what they call in French an “artichoke’s heart.”

For those unfamiliar with the French expression, un coeur d’artichaut is used to describe someone who is both strong and sensible, but who also has a frailty underneath the armor, a heart that can be injured when exposed. Without knowing much about Miss Sagnier’s personal life, one can still understand why she would compare herself to that artichoke. There is fire in her, a desire to learn and grow that she talks about quite candidly, but there is also a sense of her walking a precipice, a sense of fragility, as she says. It’s no wonder, considering what she has set herself to do. Such ambition eventually exposes anyone to criticism, and possible scorn. But there is passion underneath the ambition, and a directness and unashamed ease with who she is. It’s what endears her to the public.

Miss Sagnier’s ambition extends beyond her career. She mentioned deciding to read the classics of Russian literature, and anyone who meets her understands that she will tackle Tolstoy with the same determination. And that goes, too, for her decision to take command of the English language. “Duplicitous?” she repeats when someone uses the word in conversation. “I don’t know this word.” When its meaning is explained, she seems satisfied. She has just learned something new.

When asked what her next project was, Miss Sagnier spoke of yet another passion. “I’m doing some music,” she said, and then admitted quite freely that she was a bad singer. “Being an actor allows you to use other sensibilities,” she explained, but her true motive came moments later. “Singing gives me a feeling of freedom that I really enjoy.”

Miss Sagnier seems full of a youthful desire for experience, and somehow, meeting her gives you the feeling that such desire can only lead to good things, perhaps because her ambition comes from within. She seems to not care about anything more than a her own commitment. The ultimate downfall of her character in A Girl Cut in Two seems not to distress her, and she even alludes to a more optimistic view in her explanation of Gabrielle’s own motives. “She is cut between two ways of seeing life. [Gabrielle] is at a stage where she’s able to jump into passion, where emotion is more important than anything…and knowing that you can choose is already a proof of power.”

Never mind that Gabrielle’s choice leads to disaster. The way Miss Sagnier describes it, her choice was the right one, at least the necessary one. There is great independence in a woman who thinks like that, if not also a little naiveté, as Miss Sagnier herself freely admits. But there’s no denying the kind of life it gives you. One gets the feeling that for Miss Sagnier, her own choices are also a proof of power, and unlike Gabrielle, they will lead her to a more satisfying end.