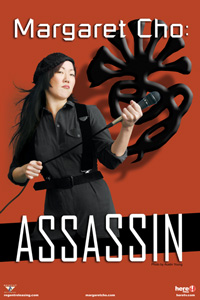 Margaret Cho serves notice on homophobic (and cock-fearing), misogynistic (and pussy-fearing), right-wing America: Al-Gayda has arrived. In what is now her fourth film of pointy-sharp political satire, America&#146;s one and only Korean-American, bisexual, politically incorrect, female gay-white-male, gay-black-male impersonator stand-up comic delivers epithets, one-liners, and probing insight. Nor does she shy away from her role as public spokesperson from the queer left, a role she has been taking on with gravitas and dignity, while poking fun at herself and everyone else along the way.

As a political satirist and progressive moral voice in the conservative wilderness, Cho has matured wonderfully since her first one-woman comic live concert recording of I&#146;m the One That I Want (2000). Five years ago, network television launched her in an ill-fated sitcom All-American Girl, where she played &#147;herself,&#148; a young Korean-American woman. Unfortunately, she was &#147;too fat&#148; and &#147;not Asian enough&#148; to be herself, and the show was quickly canceled. Cho came back from a humiliating defeat to reclaim her own voice and her self-esteem. Her brutal honesty and lacerating wit helped get her through, and launched a career as exciting and promising as Lenny Bruce&#146;s once was.

In the recordings of her next two live concerts, Notorious C.H.O. (2002) and Cho Revolution (2004), Cho let loose the acerbic dogs of sexual hell on her adoring audiences. Her trademark multicultural, pansexual, life-affirming dirty talk is in a class of its own and, clearly, is a transformative force in the history of stand-up comedy and free speech. Her description-cum-portrayal, in the current release Assassin, of the liberated women&#146;s collective vagina hurricane blowing Florida off the map scores a new high-water mark.

In Assassin, Cho revisits some of her favorite subject matter &#150; raunchy sex, the manners and mores of gay men, America&#146;s fear of women and their vaginas. She redoubles her invectives against the religious and political right with a fearlessness that is breathtaking. As a social outsider several times over, she goes where Michael Moore can only dream of. As the brazen moral bankruptcy of the current Bush administration polarizes Americans to a degree not seen since the darkest years of Vietnam, Cho&#146;s comedy takes on an almost tragic poignancy. In the extreme (and extremely graphic) specifics of her stand-up, Cho gets to the core of some universals about the flawed human condition, her love of and hopes for everyone stuck on one really f***ed up planet.