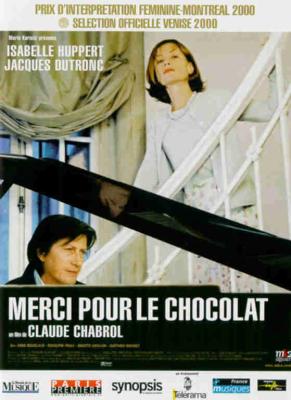 Merci pour le Chocolat, the latest entry from veteran director Claude Chabrol (Les Bonnes Femmes, The Swindle), defies expectations. Chabrol himself calls the film a "suspense-style quasi-thriller" and there are elements of suspense, but it’s suspense turned on its head. It’s easy to see fairly early in the game what’s going on, but Chabrol keeps the entire film so emotionally understated that the viewer’s response is bound to be equally cool. Thriller? No, if to thrill is to get the adrenaline flowing, it isn’t that at all.

But what the canny M. Chabrol does do is tell a story that unpeels like a slightly overripe onion, centered by a performance by Isabelle Huppert (The Piano Teacher, Les Destinees) who has become something of a specialist at playing beautiful, neurotically strung-out women.

Mika (Huppert) has inherited a chocolate manufacturing operation from her father which she runs with an iron hand. She was married briefly to Andre (Jacques Dutronc), a concert pianist. He subsequently married again and had a son, Guillaume (Rodolphe Pauly). His second wife was killed in an automobile accident after falling asleep at the wheel. As the film opens, Mika and Andre are marrying again.

A music student, Jeanne (Anna Mougalis), learns a secret long kept–that at her birth there was some confusion in identities between two babies–she and Guillaume. Her mother insists that Jeanne was indeed her child, but Jeanne’s curiosity is peaked and she goes to see Andre. He agrees that the babies ended up with the right parents, but he is intrigued with Jeanne and agrees to coach her for an upcoming piano competition..

Mika, meanwhile, is depicted as being close to Guillaume, but careless around him–she spills his nighttime hot chocolate on one occasion, knocks a pot of boiling water on his foot on another. Suspicions start to surface about the ritual nightly hot chocolate drinks…suspicions as well about what really happened to Guillaume’s mother.

Dressed impeccably in couture suits, Mika always says the right thing, the positive thing, the gracious and polite thing. But Chabrol (and Huppert) start the clues early on–she seems calculating and has a cold, flinty look in her eye. And throughout, she is crocheting an afghan which takes on the shape of a large spider web; she’s the Madame Lafarge of Lausanne. At the very beginning, she has a line, "I’m nobody’s daughter," and it turns out she was adopted. (Confused parentage and missing parents are a running theme here.)

Confrontation finally comes between Mika and Andre, and the truth starts to emerge, including Mika’s ultra-chilly confession, "Instead of loving, I say ‘I love you’ and people believe it…I calculate everything." Andre’s somewhat passive response to her revelations runs counter to expectations. Maybe it’s the soporific to which he’s addicted. But more likely, it’s a deliberate ploy on Chabrol’s part. When Andre is coaching Jeanne on Liszt’s Funerailles, she observes that the music in not like a funeral march. He responds, "It is, but in a subtle way." Merci pour le Chocolat is not like a suspense thriller. In it’s own subtle way, though, it is an original and highly cerebral examination of the psychopathic mind.