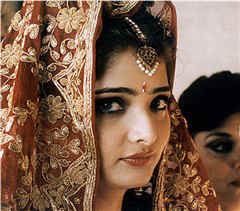 Even as the brightly colored main titles bounce across the screen, accompanied by infectious, sexy Indian dance music, Monsoon Wedding is an outpouring of joyousness. It never lets up as director Mira Nair (Salaam Bombay!, Kama Sutra: A Tale of Love) immerses the audience in her own roots–a large, affluent Punjabi family in Delhi, gathering together for the marriage of Aditi (beautiful Vasundhara Das), the only daughter of Lalit Verma (Naseeruddin Shah) and his wife Pimmi (Lillete Dubey). Marriages are perfect settings for drama–scattered families reuniting to celebrate, but finding the charged emotions of their lifetime relationships thrown into sharp relief.

In the old tradition, this is an arranged marriage. The bridegroom is a Houston engineer, meeting the bride for the first time just a few days before the wedding. Each day is punctuated with another party (the blessing of the couple, a women’s party) even as preparations for the lavish wedding ceremony and feast are underway. Marigolds, the wedding flower, hang in garlands everywhere. A waterproof wedding tent must be built. It’s enough to strain the resources of the father of the bride.

But modern social mores intrude on the old traditions. The bride has been having an affair with her married boss whom she has not quite put behind her. As attractive as her betrothed is, she slips off for a rendezvous with her paramour, one that seems destined for dire consequences. Nair deftly turns the tables and transforms the incident into satirical comedy. Indeed, she litters the story with small observations of Delhi life and behaviors, sketching in suggestions of the changes that challenge tradition–snippets of Indian TV, bridging shots of Delhi street life (especially effective to see as monsoon rains pour down like Niagara), a sari shop, Pimmi sneaking a smoke in the bathroom.

The bride’s younger brother loves to dance and wants to be a chef, to which his father is adamantly opposed; Lalit wants to send him to boarding school where they will toughen him up. A handsome cousin from Australia is attracted to another cousin. (Don’t even try to keep all the cousins sorted out.) The officious "event manager" hired for the wedding is drawn to a servant girl and a parallel romance develops. Love is in the air, and so too is passion, not all of it appropriately placed. Nair injects a disturbing revelation of family history that comes to the fore as it threatens to repeat itself during these festivities. It adds drama to the situation and deepens the characterizations, particularly of Lalit and Pimmi.

The film repeatedly breaks out into music and singing as the celebratory side of the occasion manages to overcome the problematic. These are Nair’s people and her love for them is manifest, as is the recognition of both the joys and difficulties of family life. She weaves incident and character, the specifics of these people’s lives which provide the film verisimilitude. In a broader reach, though, she portrays universal experience. This story could be about an Italian family, a Jewish family, or a Zulu family; for all the cultural differences there is a commonality in the human experience and Nair nails it in Monsoon Wedding.

"Bollywood"–the huge Hindi film industry–is largely unknown to western moviegoers. Characterized by lavish productions, glitz, glamour, and melodrama, it has its own styles and filmic conventions. Music and dancing are integral to the genre. Nair uses the music and dancing and draws on other Bollywood conventions in her film such as the style of the romantic scenes. But Monsoon Wedding remains character-based and avoids slipping into saccharine sentimentality or soapy superficiality.Filmed in just thirty days, with hand held camera, it has immediacy and a sense of spontaneity which serve the story well. That Nair doesn’t manage with the dexterity of an Altman to keep all the characters fully individualized and the relationships clear is a minor annoyance. Another Scotch, another song, and let the marigolds bloom.