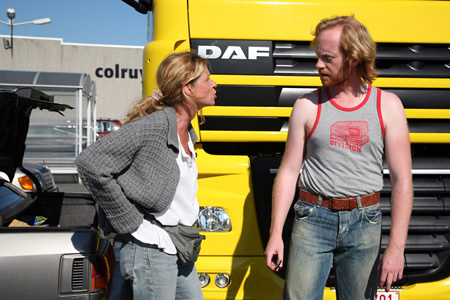 Slick-talking Johnny “Cowboy” Vermeulen is rear-ended by Moscow Matty, and turns this chance collision into a once-in-a-life time opportunity to woo his own Mona Lisa. Despite all the clichés piled up in this surprisingly heart-wrenching little film from Belgium, director Christophe van Rompaey delivers a raffishy charming, dents-and-all true-to-life examination of romance, the way real people encounter it.

Shot on location in the outlying working-class district of Moscou (in Ledeberg, outside of Ghent), in the Flemish-speaking part of Belgium, van Rompaey captures nuanced settings and nuanced performances in this hard-scrabble fairy-tale. In the opening verbal altercation between 41-year-old Matty (Barbara Sarafian), soon to be divorced mother of three, and 29-year-old trucker Johnny (Jurgen Delnaet), the gauntlet is throw down by both parties.

Harried-looking and distracted by her squabbling children, Matty backs out of her parking spot at the local big-box discount store—and broadsides a towering, bright yellow big rig cab. Out of nowhere, a full-bearded, strawberry blond trucker emerges, bellicosely demanding Matty pay for the damages to his cab. The absurd and ironic contrast of this young and lithe male Goliath fuming, misogynistically, at the discernibly older, overburdened earth-mother at-the-end-of-her-tether sets up the complex array of tensions—social, psychological, sexual, and gender—that play out in Moscow, Belgium.

In their first encounter, Matty cuts to the heart of the matter, accusing the “Viking” (one of the milder epithets she hurls at Johnny) of being totally blind—sitting up so high in his cab, thinking he sees everything, when he fails to see anything at street level, whether it’s other people, or his own mortal foibles. “I was in your blind spot when you hit me,” she spits out at him. And, sure enough, Johnny will demonstrate his blindness, again and again.

When two female traffic cops turn up, Johnny’s bravura collapses—he was clearly in the wrong, and, besides, he already has a police record (charges of wife-beating). Indeed, he had caught his own wife in bed with another man, a prosperous, Mercedes-driving haute-bourgeois, and in alcoholic rages has gone after her (off-camera) and him (on-camera). His otherwise ever-charming, yet ever self-centered “bad boy” demeanor indicates classic “trouble.”

Ironically, of course, Johnny has also hit (and snares) Matty in her blind spot, her search for a life better than the blue-collar world she has never actually escaped, her search for happiness, and for a man who is not an eternal boy. “I don’t need another man in my life,” she says, with the despair of the eternally damned in her voice, and like someone finding another battered and scared stray dog she can’t not take home with her.

Later, Johnny will come to blows with Werner (Johan Heldenbergh), Matty’s estranged husband, in part because the latter is an art college instructor, and therefore an “intellectual.” The plot unfolds in a complex manner, as Werner’s romantic relationships and 17-year-old daughter Vera’s (Anemone Valcke) vie for Matty’s attentions and affections. Van Rompaey offers up class and sex rivalries at the lower end of the socioeconomic spectrum in true-to-life snapshots.

Barbara Sarafian’s performance in this incongruously scintillating little film is a joy. Matty soldiers through the now-familiar path, of shedding her feelings of victimhood (over her artist husband leaving her for a much younger woman) while sorting her way through the husband’s mid-life crisis, which, in turn, has instigated her own. Sarafian never smiles, so grim is the weight on her character’s shoulders. She is besieged by so much of life, like Mother Courage—always resilient, drawing strength from practiced cynicism. Even as she examines her own body in the mirror and begins to see herself through Johnny’s eyes—once again as a lover, as the beloved of a much younger man—the burden of it all seemingly continues to outweigh the promise of new joy.

The original title of this film Aanrijding in Moscou (“Collision in Moscou”) captures the double meaning—the collision of vehicles, both poorly driven, mirrors the collision of two lost souls in a blue-collar exurban jungle that could be anywhere in the twenty-first century global village—and yet is oh so very, very Ghent-Flemish in its details. Cinematographer Ruben Impens works a charming balance between verité and classical visual framing. Tuur Florizoone’s atmospheric jazz-pop music adds emotional vibrancy. Jurgen Delnaet’s performance is uncomfortably close to the skin, as the charismatic, loser-in-the-making “bad boy.” Barbara Sarafian’s award-winning performance alone makes this charming heartbreaker, a true gem of a film, worth seeing.