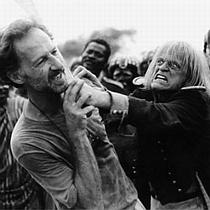 In this intriguing documentary, German director Werner Herzog retraces his steps behind the scenes of several of his well-known films, including Aguirre, the Wrath of God and Fitzcarraldo, to offer a personal portrait of his "dearest enemy" or "best fiend", the actor Klaus Kinski, who starred in five of Herzog�s films between 1972 and 1987.

Kinski was the very model of a modern crazed actor-genius, as the clips of intense on-screen performances and wild off-camera antics make clear. Herzog definitely had a problem on his hands in working with Kinski, and the passage of time has not eased the ambiguity of their love-hate relationship.

In fact, Herzog knew what what he was dealing with at an early age. As a teenager living in a Munich boarding house in the 1950�s, Herzog had Kinski as a neighbor for a brief period. Herzog returns with his camera to the now-luxurious flat, showing the visibly appalled new owners exactly where Kinski greeted the mailman naked or locked himself in the bathroom for 48 hours, raging until everything was completely destroyed.

Filming under the extreme conditions of the Peruvian jungle is a trial for even the most harmonious film crew. Herzog revisits Peru to explain his vision for Aguirre and Fitzcarraldo and how Kinski turned an already tough job into pure hell for everyone. (Much of this territory was also covered in Les Blank�s documentary Burden Of Dreams.) One Peruvian actor shows us his scars from being attacked by Kinski with a sword and tells how extras were injured in a wild shooting spree. Another clip shows one of Kinski�s extended tirades on the set, this time over the food. Herzog is at one point reduced to threatening to kill Kinski if he abandons the shoot, but we are left to decide if he was dead serious or simply matching Kinski�s grandiosity. He does say he got excellent cooperation afterwards.

Beyond the behind-the-scenes dirt, Herzog saw a method in all the madness. He was fascinated by Kinski�s intensity and the possibility of channeling it onto the screen. And yes, he admits, he sometimes deliberately provoked the actor, since some of his better performances are supposed to have come after tantrums lasting several hours prior to shooting.

Actresses Eva Mattes (Woyzeck) and Claudia Cardinale (Fitzcarraldo) portray a different Kinski, both tender and supportive, although Cardinale admits Kinski was "a nut" and his fear of being touched reminded her "of Michael Jackson". And Herzog also has fond memories of Kinski, with clips of their visit to the Tellluride Film Festival, and parting shots of Kinski playing with a butterfly in the jungle. Ultimately, however, Herzog saw the actor as "burned out like a comet" by the end of their work together in 1987. Kinski died a few years later in 1991 in Marin County, California.

Far from a simple backstage hit piece, Mein Liebster Feind is a tentative exploration of the borders of friendship, madness, and genius. This documentary could certainly be useful to aspiring directors working with "difficult" actors and is an excellent companion piece for those revisiting or just discovering Herzog�s earlier films.