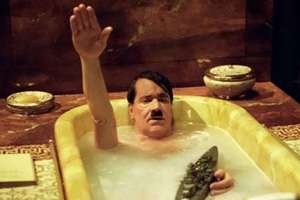 historical comedy out of a Jew’s interactions with Hitler during late 1944.

But some challenges are better left unaccepted, and unfortunately My Fuehrer

is one of them.

The film, shown at the 2007 San Francisco Jewish Film Festival and the 2007

Cannes Film Festival, is set in a devastated Berlin—when the Third Reich

hierarchy realizes that their war is all but lost.In a last attempt to

World, Hitler is scheduled to give a rousing, highly choreographed New

Riefenstahl’s cameras, complete with facades and backdrops of a pre-bombed

However, there is one huge problem: Hitler (Helege Schneider) is depressed

and emotionally incapable of performing this or any other public

(Ulrich Mühe, The Lives of Others).So a few days before the speech,

Gruenbaum, with his family, is unceremoniously brought from the

Sachsenhausen concentration camp to the Reich Chancellery to prep Hitler for

his performance of a lifetime.

The film chronicles the five days prior to the speech.Gruenbaum’s Actors

grows dependent on “his Jew.”Gruenbaum is in the precarious position of

needing to succeed to protect his family, but wanting to fail.

With this premise, the film could have been a comedy or a tragedy, but sadly

it is neither.My Fuehrer lacks the depth of character, analysis and

tension that could have turned this comedy into a drama.

statuettes for best direction, best screenplay and best film, said about My

Fuehrer “I think ultimately, the time is always ripe for a good comedy,

especially about painful topics and ones which somehow stagnate in public

discussion. I wanted to look at this horrible time with a comic eye. I had

the feeling I decomposed it from the inside. I went into this power

apparatus and raged in it as a Jew and then displayed it. I had the

opportunity to pull it out of its landmarked box”.

Yet, My Fuehrer’s humor does not make Hitler laugh-out-loud

the least bit funny.Picture, if you will, Danny Kaye playing

Gruenbaum…boldly cavorting around the Reich Chancellery and running rings

around Hitler…that would be funny.But Gruenbaum’s eyes, sad and fearful

with the recognition of his precariousness, prevent the audience from

enjoying the amusing details of the film.Yes, Hitler playing with toy

battleships in his bath could be comical, and Eva Braun complaining about

Hitler’s sexual inadequacy could be laughable, and the Nazis’ exaggerated

reliance on hierarchy and bureaucracy could be satirically clever, and

Hitler having half his moustache accidentally shaved off could be silly

slapstick humor…but not when directly and simultaneously juxtaposed with

catastrophic situation with humor; however, the disappointing result

illustrates just how difficult it is to view evil squarely and laugh at it.

On balance, the film’s realism is more compelling than its comedy.