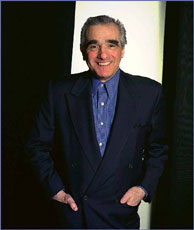 As his own filmmaking curdles into empty virtuosity – Bringing Out the Dead, The Age of Innocence and Casino are all as dazzling as they are completely unnecessary – Martin Scorsese has positioned himself as the cinema’s official goodwill ambassador. He’s been instrumental in the restoration and re-release of such classic films as The Golden Coach and Purple Noon. Long out-of-print critical works by James Agee and Vachel Lindsay have been republished under his imprimatur. And if you tune into any documentary about cinema, you’ll see him interviewed: garrulous, intense, crisply professorial in his sleek Armani suits, preaching the gospel of the movies.

Scorsese’s new documentary, My Voyage to Italy, is a passionately idiosyncratic history of the Italian cinema, framed by stories about his immigrant family. Four hours long and comprised mainly of film clips and voice-over narration, it may seem like something only the most hardcore of movie geeks could love. Yet it’s among the best films of Scorsese’s career, a welcome return to form that gives unexpected hope for his upcoming fiction film, Gangs of New York.

This is not an encyclopedic tour of a national cinema. Rather than include a minute or two from a hundred films, Scorsese instead talks through substantial portions of about a dozen major works. These sequences are edited for time but never feel truncated. (Editor Thelma Schoonmaker uses wipes to distinguish between the cuts made for the documentary and those in the original material.) The unique rhythms of the original sequences are respected, so that even when La Dolce Vita is cut to its highlights, it still maintains the turgid pacing of Fellini’s original.

The film follows the careers of the great neo-realist directors from the eruption of the movement at the end of World War II through their growth away from grim naturalism into opulent period drama and surrealist fantasy. Key later figures – Pier Paolo Pasolini, Bernardo Bertolucci and the Taviani brothers most prominently – are missing from the film, and a number of the Italian cinema’s greatest achievements (Nights of Cabiria,The Leopard, The Conformist) are mentioned only in passing or neglected altogether.

This narrow focus comes not just because the neo-realists comprise Italy’s most important contribution to the cinema, but also because Scorsese saw these films on television when growing up in a Sicilian neighborhood in Queens, New York. These works announced themselves as completely different from the Westerns and musicals this movie-mad six year old was used to. In one of the film’s most illuminating sequences, he butts a Roy Rogers western up against Roberto Rossellini’s Paisan. The contrast is startling, and gives us a sense of what these films must have looked like in the late ’40’s. The Rogers is all primary colors, stirring music and the sort of broadly heroic storytelling young boys devour. The Rossellini is something else entirely: stark black and white, no music at all, languid rhythms, non-professional actors and a brutal story that edges forward incrementally rather than leaping from event to event.

At its best, My Voyage to Italy manages enormous complexity within a very simple structure. As Scorsese works through passages from Rome: Open City or Umberto D, he ties the films to his family’s history and makes clear how being touched by these films spurred him to make his own. He shares his awakening to the possibilities of the medium. His utter absorption in these films – he clearly knows this work intimately, and is as erudite as he is passionate about it – points inescapably to his own films. Sometimes the connections are obvious: Mean Streets, for instance, is a reworking of Fellini’s I Vitelloni. The most exciting passages, however, point far beyond such easy correspondences. Scorsese’s examination of Rossellini demonstrates that the ambivalent spirituality and drive for transcendence in his own movies has roots not just in his life but in the art he prizes; once it is understood what Scorsese sees in these films, the formal strategies he borrows from them gain weight beyond simple homage.

The early neo-realist work is most often shown in spliced, scratchy16mm dupes, the blacks and whites washed out with time to a murky gray. (The videos are worse: the same terrible prints transferred too brightly to read the subtitles.) Here, the prints are lovingly restored, and it’s finally possible to see just how beautifully photographed these films were.In their austerity and the clarity of their vision, they evoke the work of great documentary photographers like Walker Evans and Robert Frank. They create a rich, offhand sense of life unfolding before the camera, as though the events are being captured rather than being staged for our benefit.

In the final sequence, Scorsese describes Fellini’s 8 1/2 as the "purest expression of love for the cinema that I know of." This is modesty: My Voyage to Italy is a love letter (to the movies, to Italy, to his parents, and especially to Rossellini, Visconti and Fellini) just as passionate, reckless and beautiful.