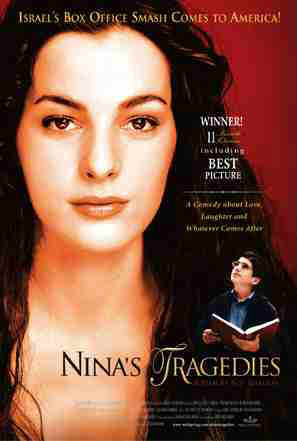 Nina’s Tragedies is an uneasy mix of farce and family drama that offers some genuinely funny and some sweetly touching moments, but it never comes together as a coherent whole.

Despite the title, the film is more about the coming of age of adolescent Nadav (Aviv Elkabets) and his relationships with the rest of his family. Nadav keeps a journal which provides both the basis for an overused voiceover and a plot element as well. Nadav’s parents have divorced. His father, Amnon (Shmil Ben-Ari), retreats into the religious life of the Hasidim and neglects his son; in turn, Nadav cuts off his father. When Amnon comes down with a terminal illness, the ultimate reconciliation is as predictable as night following day, a weakness in the film partially offset by a poignant message from father to son as well as some very funny hospital jokes about smoking.

Nadav’s mother, Alona (Anat Waxman), is a fashion designer (a source of some amusing satire) who has a series of men (none of whom register in the film) in and out of her bed. But it is her younger sister, Nadav’s aunt, Nina (Ayelet July Zurer), that Nadav adores. When Nina’s husband is killed in a terrorist attack, Nadav moves into her apartment to provide companionship during her mourning. But Nina is quickly caught up with a photographer, Avinoam (Alon Aboutboul) and Nadav once again feels abandoned.

There’s a thoroughly superfluous subplot involving Nadav’s friend, Menahem, an unlikely liaison who seems to share only Nadav’s proclivities for peeping, itself a strange side of the film that strikes a wrong note. Menahem has a romance of his own, but neither he nor his Russian paramour are developed enough to be of interest. Nor is the character who is prone to walking through the streets of Tel Aviv naked, used primarily as a bit of uninteresting quirkiness and as a forced plot device. The same might be said of one of Nadav’s teachers whose face has been disfigured as a result of an African mosquito bite–maybe there’s a cultural gulf here between Israeli and American humor.

Writer/director Savi Gabizon weaves back and forth in time, not always with complete clarity, and he give very little sense of place. Aside from a scene with the Hassids dancing in the street, the location could be most anywhere.

Were the pivotal character of Nadav more interesting, the film might have knit together more tightly. But Nadav, despite being the narrator, is mostly a reactive character, responding to what happens to him in obvious ways. There’s neither depth nor originality in the conception of the character.

The ensemble of performers offer considerable charm and manage to inject some flavor into a heavily plot-driven scenario. In the end, though, the comedy is feather-light and the emotions are drawn on situation, rather than on genuine involvement with substantively developed characters.