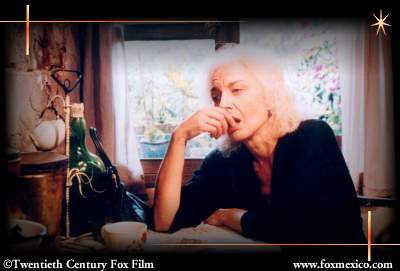 No One Writes to the Colonel, Arturo Ripstein’s film based on a Gabriel Garcia Marquez novella, is about hope sustained in the face of dashed expectations, about the survival of human dignity in the face of grinding poverty, about the triumph of love in the face of hunger, illness, age, and profound loss.

The colonel (Fernando Lujan) fought for three and a half years in a Mexican war waged by forces favoring an independent, secular state rather than a government dominated by the church. Now, decades later, he is still trying to obtain the pension to which he believes himself entitled – and which would relieve the destitute condition in which he and his wife (Marisa Paredes) survive.

Every week he dresses in suit and tie to meet the riverboat that brings the mail, but no one writes to the colonel and his ritual has become a crutch, bracing the hope which is all he has left. There is no money for food or for medicine for his asthmatic wife and they are threatened with the loss of their home as well. The hoped-for pension and the potential of a sorry game cock are the only straws at which the old man can grasp.

Ripstein fills the screen with day-to-day incident in the colonel’s life, a life in which a cigarette butt is picked up from the gutter to be smoked with pleasure on arrival home, where a pair of new shoes is an occasion of rare luxury, where his wife sneaks into the local movie for her rare bit of amusement and escape. There is folk wisdom and gently sad humor. Bit by bit, pieces of the past are revealed, particularly the story of what happened to the son who was killed by a circus acrobat, in a dispute that involved cock fighting and jealousy over a prostitute (Salma Hayek). The lost son ("My blood has died," the colonel weeps) is yet another element in their deprivation.

While they get sympathy from some, little help is forthcoming – the priest is a hypocrite (and the colonel anti-church); the doctor is a drunk and a pederast cheating on his wife; the colonel’s compadre, with whom he served in the war, is a bloated diabetic not above cheating his old friend; and the lawyer just wants more money. "I don’t know how to beg," the colonel says, "They never taught me."

But the colonel and his wife are sustained by their extraordinary love and caring for one another. They retain their pride in the face of mockery, hunger, and pain. Lujan and Paredes both give extraordinary performances, climbing inside the skins of this old couple, finding the essence of the feelings and the subtleties of interaction between two people whose commitment to and tenderness for one another is all that holds off total despair. Instead of selling their old, broken clock, the colonel gets it fixed; he knows how much his wife likes it. He offers to brush her hair as he did when they were young. She tears a hole in an old sock so that she can then mend it, because he is soothed by the movements of her sewing.

Ripstein doesn’t shy away from the grimness here; he is a realist who eschews sentimentality. But, as his camera finds beauty in crumbling plaster and peeling paint, as it caresses the lined faces of these veterans of hardscrabble life, his characters retain their dignity and their humanity: they are survivors, living at the brink.