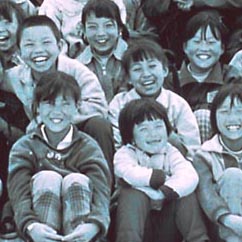 China into Film: Frames of Reference in

Critics often say that movies are "full of life" to indicate that they’re full of hubbub or have an emotional bounce to them, but the phrase rarely means that a movie has reduced the world to a portion small enough to be considered as a whole. Zhang Yimou’s Not One Less does precisely this. With an emotional payoff that’s out of all proportion to its stripped-down sense of drama, it’s the best film released in America so far this year.

When the schoolteacher of a rural district in China must tend to his dying mother, his substitute turns out to be Wei Minzhi, a 13 year old girl who&#146;s scarcely older than her students. The departing teacher offers little guidance to Wei, only telling her to have the class copy out one lesson each day and to not waste the school&#146;s supply of chalk. Her proximity in age to that of her students deprives her of everything but nominal status as an authority figure: the kids cut up in class and ignore her scoldings, and a bright-eyed rapscallion named Zhang Huike is a particular thorn in her side. Wei covers her distress by putting her emotions on automatic pilot, issuing assignments in a sullen monotone, then withdrawing to the front stoop to prevent her charges from fleeing the schoolhouse.

Things change, though, when Zhang Huike runs off to the city to find work. The impoverished district has been plagued by dropouts, and before leaving the teacher promised Wei a small bonus if the class is intact upon his return. Wei enlists the kids in a new project: to help her get to the city so she can retrieve the wayward boy. But when all of her efforts to raise the necessary bus fare have fallen apart, she resolves to walk to the city, and it&#146;s during her long journey that the seriousness of her mission becomes apparent. An extra ten yuan wouldn&#146;t justify the tenacity with which she pursues the member of her brood who&#146;s gone astray. Wei is responding to the duty of being a teacher. She&#146;s been told to educate the children &#150; all of the children &#150; and not one of them is going to get any less from her.

As the little automaton begins to unwind, so does Zhang&#146;s storytelling strategy. The languorous schoolhouse scenes are contrasted against those set in the city, a beehive of ceaseless activity where action occurs in bursts of energy. As Wei exhausts her few leads and Zhang Huike&#146;s life on the streets grows increasingly desperate, both are disillusioned by the people they encounter. A young girl jaded beyond her years, a vagrant who dispenses some gruff but useful advice, an officious receptionist at a TV station, a middle-aged cafe owner who struts about in tasteless fishnet stockings &#150; all are marvels of thumbnail characterization. By using untrained actors who more or less play themselves (including Wei and the other students), Zhang has staved off the false emotions that usually attach themselves to stories about children. All of the characters feel like they have ongoing lives away from the screen; just as importantly, they aren&#146;t locked into unvarying moods when they are onscreen. In a brilliant scene, the TV station receptionist can be seen internally rationalizing the dressing down she receives from her boss even as he&#146;s delivering it to her. Zhang has isolated small pockets of existence, like fireflies caught in a bottle, but done it in an offhanded way. He&#146;s made reality entertaining.

Not One Less indicts authoritarian dogma by showing that only a difference in emphasis separates it from humanistic values. Wei’s sense of mission springs not from dedication to an impersonal bureaucracy but because she understands it’s the right thing to do. The movie ends on a grace note brought about when the television station does all the right things for what may be all the wrong reasons. The closing scenes of reconciliation and relief in Not One Less have an aching purity as Wei Minzhi and her students both recognize her for the teacher she is. Zhang Yimou has brought a new human being into the world.

(15671)
$4.87 (as of January 21, 2021 - More infoProduct prices and availability are accurate as of the date/time indicated and are subject to change. Any price and availability information displayed on [relevant Amazon Site(s), as applicable] at the time of purchase will apply to the purchase of this product.)

(20619)
$7.99 (as of January 21, 2021 - More infoProduct prices and availability are accurate as of the date/time indicated and are subject to change. Any price and availability information displayed on [relevant Amazon Site(s), as applicable] at the time of purchase will apply to the purchase of this product.)

$5.87 (as of January 21, 2021 - More infoProduct prices and availability are accurate as of the date/time indicated and are subject to change. Any price and availability information displayed on [relevant Amazon Site(s), as applicable] at the time of purchase will apply to the purchase of this product.)
related posts