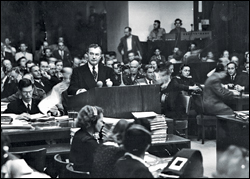 Nuremberg: Its Lesson for Today

The “today” in Sandra Schulberg and Josh Waletzky’s restoration of Stuart Schulberg’s (Sandra’s father’s) documentary is 1948; but today we are the first Americans to see this wrenching film about the rise and progress of Nazism and the Nuremberg Trials. The film has been shown since last year at various American film festivals and will be seen in the San Francisco Bay Area for a limited time starting January 21st.

Stuart Schulberg, with the assistance of his brother Budd (screenwriter of such classics as “On the Waterfront”), made the 80-minute film at the request of the US War Department and John Ford, then working for the OSS (Office of Strategic Services). Its aim was to record the Nuremberg Trials of Nazi war criminals and to show the Germans how their nation had got to where it was after the war.

Germans did indeed flock to the film (it would be fascinating to hear their honest reactions), but it was never released in America. The reasons are obscure: was it because, in 1948, the Soviet Union, partner in the trials, was no longer America’s ally? Or because the US didn’t want ugly truths about Germany to interfere with the Marshall Plan? Or simply because the War Department, State Department, and Army didn’t want the American citizenry to dwell on the past? Nobody knows.

The film was judged lost, until Sandra Schulberg discovered a German-language copy in her parents’ home and resolved to restore it. Synchronizing the visuals with the trial’s transcripts (narrated by Liev Schreiber), she has achieved this remarkable task.

The first part of the film was based on two other Schulberg documentaries, which were shown during the trial: the four-hour “The Nazi Plan,” and the one-hour “Nazi Concentration Camps.” These were created from footage that the Nazis themselves had made and that were in the process of being destroyed by surviving Nazis. The second part consists of the trial itself, including excerpts from the opening and closing statements by the lead judge, Justice Robert H. Jackson. Twenty-two prisoners, among them Hermann Göring, Rudolph Hess, and Albert Speer, sit in the courtroom, many wearing dark glasses against the glare of the lights used for filming. (Though the trial lasted the better part of a year, from November 1945 to October 1946, only some 25 hours of film were shot.)

The film’s first segment chronicles the rise of the Nazi party, including the Reichstag fire and German rearmament; and the progress of the war–the Anschluss (annexation) of Austria and occupation of Czechoslovakia, then the conquest of Poland, Belgium, France, etc. Cynically, Hitler declares his friendship with each country before invading it. Russian POW’s are starved and frozen; the Polish intelligentsia, clergy, and nobility are murdered; the Czech village of Lidice is liquidated in reprisal for the assassination of SS Obergruppenführer Reinhard Heydrich. Though much of this footage is familiar to history buffs and people who see a lot of documentaries, it’s nevertheless hard, at times impossible, to watch.

The elimination of the Jews forms an important part of the first segment. Again, much of the material is familiar though nonetheless shocking. “We knew the people were dead when the shrieking stopped,” says one Nazi about an improvised gas chamber.

Finally we hear the Nazi prisoners’ defense statements. Some simply deny their guilt, or blame each other, including Hitler. Göring claims that he didn’t know that the Jews were being exterminated, though he admits that “certain excesses” had occurred. Several Nazis admit their guilt and shame, calling for a repudiation of dictatorship and hope for the future. The verdicts are then read out, one by one. Three defendants are acquitted; the rest are sentenced to long prison terms, or, in many cases, to death by hanging. (Göring cheated the executioners by committing suicide.)

What are we today to make of this document? Some of the subtitles and, in fact, the title, show their age (who today would talk about a “lesson for today”?), and so does the momentous score, created by John Califra from cues by original composer Otto Borgmann (ironically, the composer of scores for Nazi propaganda films).

Much of the historical material, as mentioned, is familiar. What seems different – and bracing – is the belief in justice and its swift administration. It’s reassuring to know that many, though by no means all, of the Nazi perpetrators didn’t get away with it.

It would be better yet if there were more footage of the courtroom proceedings, but we can take pleasure in the fact that we are among the first Americans to see this material at all.