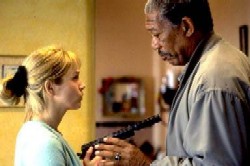 Neil LaBute’s Nurse Betty is the first post-traumatic stress disorder comedy. It’s also the film in which LaBute finally earns the accolades he won for his first two films.

Renee Zellweger plays Betty Sizemore, a small town waitress who copes with her boorish husband (Aaron Eckhart) through fantasy and denial. She’s repressed her feelings to the point where she meets his every transgression with a beaming smile, reserving her real emotions for the hour each day she spends watching "A Reason to Love," her favorite soap opera. Then she can sob and fume at will, throwing herself completely into the show’s hyperbolic emotionality.

One night, Betty stumbles into a brutal crime. It’s a cold, repugnant scene, filmed with none of the visceral thrill of most movie violence. When Betty tunes out of the world from the shock of seeing it, it’s absolutely understandable: LaBute makes the scene so harrowing for us that we see why she’s incapable of living with the shock of having experienced it.

Betty snaps, suddenly imagining herself to be Nurse Betty, the former fiancee of Dr. David Ravell, her soap opera’s smarmy leading man. No longer able to distinguish the world of her favorite show from her own life, she takes off for Los Angeles determined to win Ravell back. Unbeknownst to her, the car she’s borrowed for the journey is loaded with drugs, so she’s pursued by both the police and a pair of professional killers.

It’s a ridiculous premise, one that succeeds via the deft employment of one of Preston Sturges’ favorite tricks: as absurdity piles upon absurdity, the audience is left too breathless to question the plausibility of the events. It’s comedy by inflation, a dizzying escalation of ludicrous incidents.

The violence that kicks off the film ripples throughout, giving what could have been a quirky celebration of eccentricity a charge of danger that threatens to overwhelm the comedy at every moment. We never quite know what will happen next – the story careens into the most unexpected territory – but we’re always tense with the knowledge that it could be something awful. The comedy is pitched just this side of terror, which makes the film that much funnier.

Nurse Betty is a huge leap forward for LaBute. Working from a screenplay by John C. Richards and James Flamberg, he’s left behind the acrid undergraduate cynicism of his first two films, In the Company of Men and Your Friends and Neighbors. Those deeply unpleasant works were horror movies masquerading as high art, the stilted, Mamet-lite dialogue fronting for the cheesy shock tactics. His fine casts were straitjacketed by the grossness of their conception: the actors played vices, not characters.

Here, LaBute has replaced contempt with affection. The characters run the gamut from delusional to vicious, yet they’re fully human, shaded in with complex motivations and touches of self-aware humor. The cast responds with rich performances that keep the comedy grounded with their depth of feeling.

Betty is a character that plays to Zellweger’s primary strength, an ability to project wounded vulnerability. In her early scenes, you can see how much it’s cost her to stifle her feelings. She’s made a conscious decision to be ignorant, thinking the best of everyone despite the evidence of their behavior. She’s managed to keep the peace, but the effort’s left her vacuous and a little pathetic. Ironically, becoming Nurse Betty restores her: the soaps may be florid cartoons, but they offer her a chance at something more emotionally real than anything she’s felt in years.

Though no one else hits Zellweger’s peaks, the film is studded with remarkable performances. Chris Rock channels the hostility of his standup routines into a character who fuses unchecked aggression with an obsessive attachment to "A Reason to Love" just short of Betty’s own. Morgan Freeman gently parodies his stately persona, playing his hitman’s insistence on gallantry (and his growing instability) for laughs. Harriet Sansom Harris’ turn as a bartender is exquisite, her short conversation with Betty aching with regret and memory. Even the often-grating Crispin Glover is effective, his vocal tics and bug-eyed stare used sparingly.

Eckhart is the sole exception. From his awful mullet haircut to his callous disregard for Betty’s feelings, he’s a villain so one-dimensional he could be twirling a handlebar moustache. Eckhart is a gifted actor – he showed extraordinary warmth in Erin Brockovich – but his work with LaBute (he debuted in In the Company of Men) is cramped, shrill and monotonous. It’s an unfortunate lapse in a film this rich.

Everyone here translates their experiences through television or music (they’re always watching the soaps or blasting the radio), but the film isn’t judgmental about their immersion in trash. The giddiest moments share in the characters’ delight, knowingly kidding the conventions of soap opera while exploiting them. When arch music swells behind a kiss, it’s both funny and moving – we’re invited to laugh at the cliche at the same time that we’re swept away by its transcendent emotion. Nurse Betty is something quite original: a comic meditation on our involvement with popular culture, one that honors the power of even the most banal and trivial art.