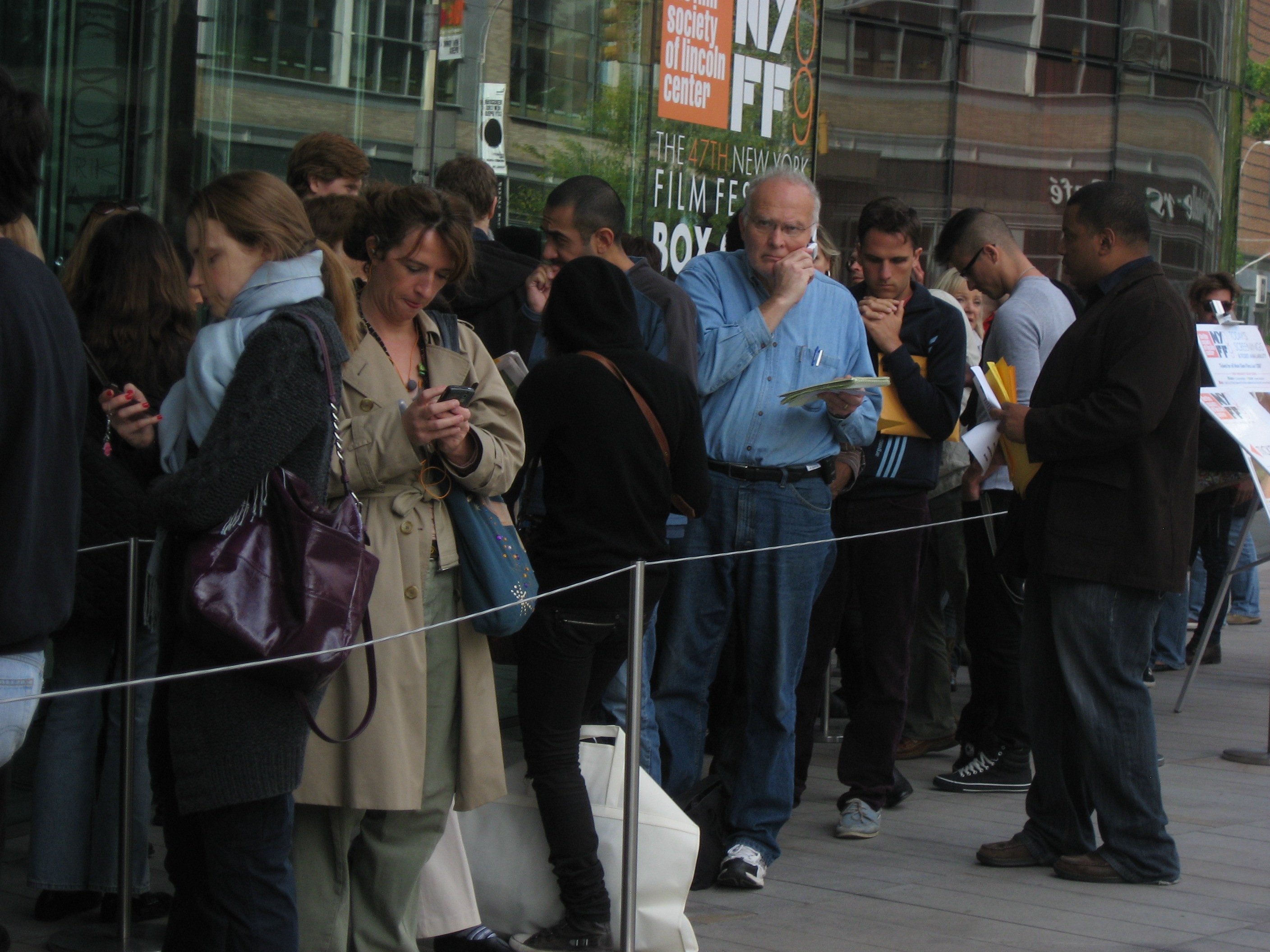 If the New York Film Festival presented by the Film Society of Lincoln Center sets the stage for the upcoming art house movie season, then the outlook is grim.  By that I don’t necessarily mean bad, but definitely dark, introspective and somber.  On one hand, that may seem surprising, given the universal surge of hope that seemed to sweep over this country and others in the wake of the presidential race and outcome; but on the other, we do still live in the reality of the recent chain of events that revealed corporate corruption and created economic collapse.  Of course, whether the negative cinematic climate reflects the filmmakers’ sensibilities or the preferences of the festival’s selection committee, we’ll never know.  Be that as it may, the NYFF 2009 came and went with mostly dark dramas in varying degrees of quality, with inclusions by many of the festival’s usual suspects of filmmakers and some new ones.

With just a limited pass this year, I had to be selective about my screenings and rely to a certain extent on recommendations, or on the validity of movies getting an early buzz.  That said, I approached my festival friends manning the press desk.  “You gotta see Vincere.  It’s all about the musical score and cinematography and the fact that it’s being compared to The Godfather as far as the feel and look,” they all said almost in choreographed excitement.  I’m glad I listened, because out of the gate I hit a winner, albeit not the festival’s official “opening” film.

Vincere, by Italian filmmaker Marco Bellochio, is an absolutely amazing project. It is one of those movies that make you so wonderfully aware of the “art” of filmmaking.  This is a story about Mussolini’s alleged “secret” marriage to Ida Dalser.  Later, the dictator denied the marriage and the son born from the relationship.  His denial spins Dalser into an obsessive state and eventually she is institutionalized in an attempt to silence her.  Because the film begins at the point where Mussolini is an impassioned journalist and activist, you initially think it is going to be a biopic about Mussolini.  Instead, half way into the film, the focus shifts from Mussolini just as he is coming into prominence to Dalser’s story.  In between, Bellochio deftly interjects archival footage of Il Duce and the political backdrop of a changing country.  To say the two lead actors (FillippoTimi as Mussolini, Giovanna Mezzogiorno as Ida) are talented and appropriate for these roles is an understatement.  They are nothing less than utterly captivating, and Timi maybe doubly so as he surprisingly takes on two roles, both incredibly portrayed.  If he manages to avoid comparisons to his Spanish counterpart, Jarvier Bardem, I’d be surprised.

As good as they are, the two actors come second to the real leading characters of this film- the visually ravishing look thanks to cinematographer Daniele Cipri, and the raptous big original music by Carlo Crivelli.  With the operatic/classical score, authentic period feel and big acting, Vincere to some may feel as if bordering on melodrama, and maybe it does.  But for some reason, in the hands of Bellochio it stops just short and feels so right in its intensity.  It’s like the best of a Visconti, Bertolucci and Fellini movie all in one.

A Room and a Half is Russian animator Andrey Khrzhanovsky’s feature film debut.  In this story about a post WWII family of three and poet Josef Brodsky’s cultural scene growing up, he combines scripted scenes, archival footage and animation.  Although a bit on the unnecessarily longish side, and I longed for more dialogue between actors, it is a creative take on a biopic about an interesting character.

It’s no surprise that Claire Denis’ films are frequently selected for the NYFF.  Her works are small but powerful and/or poignant, and her style is unique and nondescript.  As such, her latest inclusion, White Material, was an easy choice for me.  Isabelle Huppert portrays one of a few despised Europeans remaining in a war torn African country.  While trying to forge ahead with work as usual on her coffee plantation, she is in denial of the chaos around her and the tragedies that befall her family and workers.  Huppert, as usual, takes on an interesting and strong character and gives a fearless performance.

Another French inclusion in this year’s line up was Catherine Breillat’s Bluebeard.  Usually I associate Breillat with films that are edgy and sexually explicit and passionate, but Bluebeard was anything but.  The story unfolds as two young sisters read the 17th century tale of one of the first serial killers.  Sounds like an interesting premise, but instead it comes across as a badly staged play.  This is an awkwardly shot and paced period study, with equally awkward performances that left me wondering how did this get past the selection committee?

Thankfully the Bluebeards of the festival were few and far between and my next viewing left me astonished.  Precious, the festival’s centerpiece selection, is a riveting urban drama based on the underground hit novel Push by Saphire.  Harlem-based director/producer Lee Daniels unflinchingly recounts the unimaginable hardships that the story’s central teen character Clareece “Precious” endures.  At the same time, Daniels manages to breathe new life into an equally neglected and abused genre, securing what I think will prove to be his masterpiece.  There are so many good elements of this project, it’s hard to say what stands out.  The pacing manages to be brisk, but it never feels rushed; the performances are strong, but never over-the-top; the casting is very surprising, but works.  In fact, I’m glad I went into the screening not knowing who the stars were; otherwise, I might have been skeptical.  Instead, I was wonderfully surprised at how scary, strong and believable Mo’Nique is as the abusive mother, and raw, patient and tender Mariah Carey is as a social worker.  But the real head turner here is newcomer Gabourey Sidibe, a non-actor find from Brooklyn.  Her performance is raw and real and completely engaging.  Make no mistake about it-while this is a movie not to be missed, it is a hard movie to watch, although Daniels manages to deftly balance the harshness with tenderness.

Just when you thought things couldn’t get any darker, you run into a Todd Solondz and Lars von Trier movie. Life During Wartime is Solondz’s unique spin on creepiness in suburbia.  The casting, which includes Allison Janney and Paul Reubens, is exceptional, but the mood is his usual signature sadistic sadness.

Antichrist, directed by Lars von Trier, may prove to be his most provocative and controversial film yet.  The movie stars Charlotte Gainsbourg and Willem Dafoe (only) as a couple reeling from the tragic death of their little boy.  Gainsbourg’s character is especially racked with grief and depression, while Dafoe, her therapist husband, is determined to save her and their marriage, taking them to the woods and through counseling on his own terms.  The revelations of fears and guilt lead to explicit sexual encounters and violent outbursts that few art house drama films have gone.  This is an engaging film, with many metaphors (whether you get them all or not is another story), disturbing images and a shocking, yet brilliantly shot opening that is a must-see (if you don’t get there for the first 10 minutes of the movie, don’t bother to stay). If you’re used to von Trier, brace yourself because he’s taking it to a different level, which may or may not be good.  If you’ve never seen a von Trier film, you might not want to start with this one.  At the time of my viewing, the movie had not yet been rated.  As it is, I’d be surprised if he gets less than an X for sex and violence.

Closing out the festival and completing the circle of darkness was another festival favorite, Pedro Almodovar.  His latest film, Broken Embraces, features Penelope Cruz as the muse of a blind screenwriter who recounts his tale of forbidden love and heartache.  I, like so many others, am a huge fan of Almodovar’s work, but this, like his previous two films, didn’t work for me, bordering on tedium.  While I don’t think Almodovar can make a bad film, technically speaking because he’s such an exceptional visual filmmaker, sometimes his stories lack energy and interest.  Whether a comedy or drama, he always straddles the line of a solidly good storytelling and melodrama.  He’s known for that, and usually masterfully and humorously balances the two.  But in Broken Embraces he seemed to cross way over the line into melodrama and much of the film seemed too soap opera-ish.  Maybe it’s inevitable that when you’ve put out two masterpieces in a row, such as All About My Mother and Talk To Her, every drama after falls short.

Overall, the NYFF is a gem in the festival circuit.  It’s small and manageable, yet with an interesting take on world cinema, and the screening venues are two of the best in the City (Alice Tully, Walter Reade).  What this year’s line-up seemed to lack was the variety of genres and sensibilities of previous years, and too much of the same in directors selected.  Whether for political reasons or personal favoritism, the selections can seem like a private club, with certain entrants assured placement and honor regardless of quality.  The hope is that in future the festival will present a wider range of genres, mood and directors.  In the meantime, I recommend you look out for some of this year’s selection at an art house in your town.

What Got the Buzz:

– The Art of the Steal (Don Argott, USA)
– Mother (Bong Joon-ho, South Korea)- I love this filmmaker. He’s super creative and whimsical.  His earlier film is The Host.