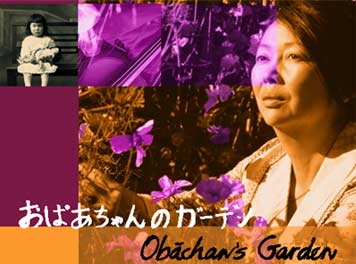 Obachan’s Garden is a documentary for which not a whole lot of the usual visual material was available for filming. But director Linda Ohama was obviously committed to bringing her grandmother’s story to the screen and she combines talking heads, a few surviving souvenirs, some limited archival film, and dramatic reenactments to tell the story of Asayo Murakami, a personal saga that resonates beyond its particular history and achieves genuine emotional impact through its unpretentious sincerity, its humanity, and the indomitable spirit of its hero.

And what a hero! Filmed in her wheelchair at age 103, she is still able to relate memories from a life that spans generations and cultures, a life with repeated hardships which she overcame with independence and grit and, in truth, the filter of selective memory.Even in her current feeble state, a plucky strength is apparent, as is a mischievous sense of humor and a big smile.

Originally from Hiroshima, Murakami was married there and had two children. She says that her husband abandoned her for a job at the Emperor’s court in Tokyo–and he took the two children with him. Needless to say, the position of women was inferior, powerless. At age 25, she became a "picture bride." On the basis of exchanged photos, she agreed to marry a Japanese man in Canada who paid her passage from Japan. But, on arrival, she was not attracted to him and determined to go her own way–an unusual expression of independence at the time. She found work in the canneries; it took her three years to repay the rejected suitor the $250 passage money.

Murakami subsequently married a man of her choice, a boat builder who was a widower with two children. They had a total of eight children together by 1942. After Pearl Harbor, the family was interned to a sugar beet farm in Manitoba, a demeaning setback, both materially and emotionally. After the horror of the devastation of Hiroshima which brought the war to an end, they settled as farmers in Alberta. Murakami’s love of gardening, of her violin and dancing, and of a lively social life are recalled. Through it all, she carries the pictures of her first two children, long disappeared in her past in Japan, still the objects of her yearning.

It is the mystery of what happened to the children that provides some dramatic tension for the film. Ohama skillfully drops in reminders of her grandmother’s obsession about them, only at the end revealing the truth about what happened, the history which the family turned up through research in Japan.

And, by the time this story about extraordinary ordinary people is told, Ohama has justified the lofty themes with which her film opens: the crosscurrents of memory and reality from the past, the dreams that shape reality in the present and the future. It is all a little slow-moving, it is all beautifully subtle and understated, and it is all the stuff that will stay in memory when far flashier films are long forgotten.