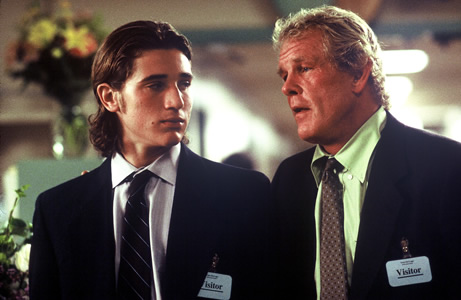 Written and Directed by James Ponsoldt

Nick Nolte is one of those film actors for whom the wear and tear of age is a gift rather than a curse. Unlike the handsome leading men whose best years are behind them once they pass sixty, Nolte never had the looks in youth to miss once age diminished them. On the contrary, Nolte’s looks are more compelling now than they ever were before; his face is actually a gorgeous map of a life lived. With any luck, that face will help Nolte as he competes for prime roles for older men in the years to come. Perhaps the best years of Nolte’s career are ahead of him. They certainly do seem that way, if his expansive performance in “Off the Black” is any indication.

Nolte plays Ray Cook, a 57-year-old junkyard operator who spends his spare time as an umpire for the high school baseball team. Ray doesn’t have much else to love besides baseball. He’s a curmudgeon who lives alone, drinks too much beer, falls asleep in front of his TV, and probably has advanced prostate cancer that he refuses to do anything about. “I’m not gonna get cut,” he growls to his doctor.

The idea that Ray knows his days are numbered is never fully acknowledged, and yet it underlies what he does over the course of the movie, especially his gruff attempts to develop a friendship with a 17-year-old boy named Dave Tibbel (Trevor Morgan), a pitcher whose last pitch Ray called “off the black” (out of the strike zone), which cost his team the game. Dave and a few teammates seek revenge by vandalizing Ray’s house one night, and Ray catches Dave in the act and decides to let him work off the damage instead of calling the police. Dave begins his penance reluctantly, but winds up liking Ray despite his orneriness. Ray in turn develops a fondness for the boy, and the two slowly drift from a grudging acquaintance towards a solid friendship.

This may be Nolte’s film, but Trevor Morgan holds his own as the unhappy and confused teenager who seems to be hiding his emotions behind a wall of silent fortitude. Morgan’s performance counters Nolte’s in countless captivating ways. Whereas Nolte has the slouchy weariness and touchy wiseass demeanor of a man who has lived too fully if not too well, Morgan shows us the gentleness and sincerity of a young man who has not yet been hardened by life.

Standing alongside Nolte at about the same height, Trevor Morgan is a perfect counterpoint to the aging bull that Nolte is. It’s all there in Morgan’s face, which, unlike Nolte’s, is not only a thing of beauty, but as expressive of a full range of emotions as an actor could hope for. This is a breakout role for Morgan, but it might not have been so if not for Nolte’s magnanimous presence. The scenes between the two actors are quite remarkable in their emotional resonance, and that has a lot to do with how well these two work together. There seems to be a mutual respect, a mutual caring that is not only formed by the story, but exists between these two actors as well.

There is a particular poignancy in watching Nick Nolte, in a role that depicts a man at the end of middle age, interact with Trevor Morgan, a child actor who came to prominence in “Mean Streets,” and who is now on the verge of manhood. At opposing ends of the timeline that distinguishes phases of life as well as a career, they meet for a life-changing moment of engagement. It is one of the many special elements of film when such moments, however fabricated, however make-believe, are captured for our scrutiny, and ultimately our emotional fulfillment.

“Off the Black” is writer/director James Ponsoldt’s first movie, and it’s a beautiful debut. When I found out how young Ponsoldt is, only twenty-six, I was shocked that someone so young could have such insight into, and such empathy for, the existential disquietude of middle age. But Ponsoldt’s debut effort also shows signs of inexperience. Many scenes end clumsily, and transitions feel forced, or scenes feel pasted together too abruptly. The scene transitions Ponsoldt uses, images of the landscape with no narrative reference, is reminiscent of Ozu and yet they somehow have none of his poetry. A few minor characters are awkwardly introduced and then left undeveloped, and though some of the scenes are interesting on their own, they end up as distractions from the movie’s central theme. Ponsoldt seems to be trying to keep the film untidy to give it a more naturalistic feel, but sometimes he loses sight of any aesthetic to frame it.

But these are only minor faults that experience can easily erase. Let us hope he gets the chance. As a first film, “Off the Black” shows great promise. Ponsoldt is obviously a filmmaker with a lot of heart and a keen mind for the subtleties of relationships. With any luck, his best years are ahead of him.