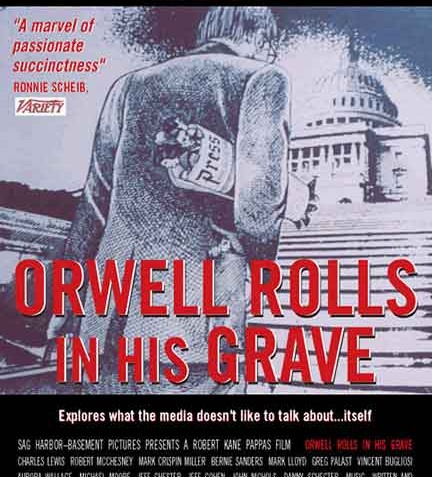 The Elements of Journalism : What Newspeople Should Know and The Public Should Expect

Shaking the Foundations: 200 Years of Investigative Journalism in America

History is always written by the winners. Documentaries examining unresolved political battles cannot partake of the comfortable illusion of being &#147;correct.&#148; In the escalating polarization of the current political climate, films such as Michael Moore&#146;s Fahrenheit 9/11 or Robert Kane Pappas&#146; Orwell Rolls in his Grave can instantly shatter that illusion.

A frequent lament heard on the left in the United States involves the proverbial historical amnesia of Americans as a whole. In Orwell Rolls in his Grave, Pappas raises the stakes several degrees and focuses on the very filters through which news, and the history constructed from accumulated reportage and research, are constructed. Asking whether George Orwell&#146;s 1984 has come to pass in the United States (the answer is an emphatic yes), Pappas piles up the evidence, from media professionals, public intellectuals, published research, and the public record. &#147;We falsely think of our country as a democracy when it has evolved into a mediacracy,&#148; author and filmmaker Danny Schechter says on camera, &#147;where a media that is supposed to check political abuse is part of the political abuse.&#148;

Taking a cue from Jeff Cohen, founder of FAIR (Fairness and Accuracy in the Media), Pappas works his way through a compelling list of &#147;the best stories never reported&#148; in mainstream media. Dispensing with the polite lie of giving &#147;all&#148; sides &#147;fair&#148; airing of their views, Pappas draws together the collective wisdom of the Serious Left. The viewer is treated to some engaging kitchen table talk, where everyone has let his (yes, mostly straight, mostly white, mostly middle-class, and unapologetically left men) hair down. &#147;What you want in a media system,&#148; Miller is referring to Nazi leader Gobbels&#146; strategy on camera, &#147;is to present the ostensible diversity that conceals an actual conformity.&#148; Telling even in such minor details as this, Pappas demonstrates the lie of American media.

Vignettes-cum-case studies demonstrate how transnational corporate media has aligned itself with a radical right-wing White House (read: Bush dynasty) to recast reality to serve their own graven purposes. To take a simpler example, Bernie Sanders, independent congressman from Vermont, identifies Orwellian doublespeak of the Bush White house, when, for example, re-labeling the estate tax (which affects only the top 2% of Americans) as a &#147;death tax&#148;&#151;whereby, presto-chango, everyone with any common sense automatically falls into vehement opposition. Pappas&#146; primer includes how Reagan manipulated the release of the US hostages in Iran (the October Surprise stage of the Iran-Contra scandal), how Clear Channel parlayed family ties with the Texas Bushes to end broadcast localism in exchange for private wealth and influence, how family connections and influence over the Supreme Court empowered corporate media to hand the Florida recount to George W. And the list goes on.

Assembled on a shoestring budget, featuring interviews with renowned media critics, clips from broadcast news stories, camera shots of print-format quotes and statistics and maps, the documentary&#146;s very low budget is abundantly obvious. The persuasion of Pappas&#146; argument lies in the accumulation of original documentation, allowing the political perps to condemn themselves with their own words. In another bone-chilling, damning indictment of the legal fictions of a corporately-owned &#147;free press,&#148; FCC chair Michael Powell (&#147;coincidentally&#148; Colin&#146;s son), is shown responding to Congressional investigators&#146; charges of betraying the public interest by saying, in a striking imitation of a bleating sheep, that he has &#148;no idea what the public interest is.&#148;

Americans tend to see themselves as free, open-minded, middle-class, and the envy of the rest of the world. Thinking in terms of class is rude and impolite, and vaguely &#147;un-American.&#148; Alas, as demonstrated here, the super rich understand and act on class interests, freely engaging in the Orwellian tactics of "doublespeak," "big brother" and "the permanent war.&#148; &#147;A chill wind is blowing in this nation," actor Tim Robbins is shown saying, &#147;If you oppose this [George W. Bush] administration, there are and will be consequences.&#148;

More accessible to a general audience than Manufacturing Dissent: Noam Chomsky and the Media, Orwell Rolls in his Grave deserves (or rather, urgently needs) to be seen by everyone. Unlike, Fahrenheit 9/11, it will not likely break out of the indie and art film circuit. As Pappas makes unequivocally clear, 1984, and the permanent war against the rude and impolite, is happening now and from now on.