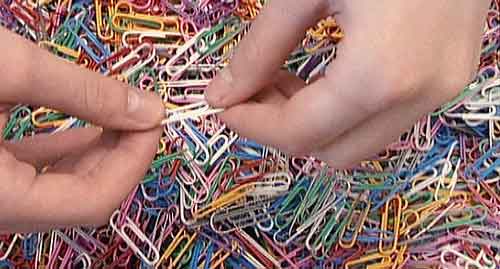 Paper Clips wears its heart on its sleeve. And on its chest and on its back and just about everywhere else a heart can be hung.

In Whitwell, Tennessee, a small Appalachian town, two teachers, with the support of their dedicated middle school principal, created a Holocaust project for their students, intended as a lesson in tolerance through the study of one of history’s most grievous tragedies of intolerance. Whitwell, with a homogeneous population of white Protestants, is noted to have no Jews, no Catholics, five Blacks, and one Hispanic among its population of 1,600. Principal Hooper says, "When we come up against someone not like us, we don’t have a clue." And this, historically, is Bible-belt country, Ku Klux Klan territory, near to where the 1925 Scopes "Monkey" trials pitted modern science against Christian mythology.

As they studied the Holocaust, it was realized that the idea of six million eradicated Jews was a number virtually impossible to grasp and a way was devised to make that number real for the students. When they learned that during the war Norwegians wore paper clips on their lapels as a symbol of resistance against the Nazis, they decided to collect six million paper clips. A letter writing campaign was conducted and paper clips started to arrive, often accompanied by statements of support or recollections of family lost in the camps.

The project mushroomed when it was discovered by a couple, German foreign correspondents in Washington, DC., whose support resulted in coverage in The Washington Post and on NBC News. Within six weeks, the paper clip count reached 24 million and some 25,000 letters were received.

A group of holocaust survivors visited the town (well covered in the film) and their tales of personal experiences added a crucial element of reality to the understanding of the students and the town. A permanent exhibit of the project was set up in an old German cattle car that had been used to transport Jews to the camps, now imported all the way to Tennessee. And, to the special credit of this community (and a testament to the lessons of tolerance learned), they decided to include not just six million clips for the murdered Jews, but five million more in memory of the homosexuals, gypsies, and Jehovah Witnesses who were victims of the Nazis as well.

Paper Clips is a documentary of impeccable intentions about a community filled with unimpeachably sincere and good-hearted citizens. The film tells its story cogently and with taste. But it is so unrelievedly positive in its approach that it weakens its own case.

Paper Clips is a worthwhile record of an admirable undertaking, but a little less sentiment and a little more edge might have produced a stronger film.