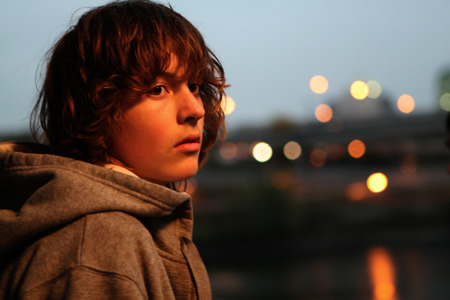 Written by Gus Van Sant, adapted from a novel by Blake Nelson

There are certain times in a filmmaker’s career when everything comes together in a kind of perfect storm, and what comes out of that serendipitous alignment of all the right ingredients is a creative work of sheer magic, a film that is so complete unto itself that it fills the viewer with rapture. For Gus Van Sant, Paranoid Park is that film.

Van Sant laid the groundwork for Paranoid Park in his three previous forays into more experimental terrain—Gerry, Last Days, and Elephant—the last concentrating on the same environment as Paranoid Park, that strange, alienated subculture called adolescence. But Paranoid Park surpasses the others in its vigor and its transcendent power. It’s the apotheosis of Van Sant’s aesthetic vision, a triumph of an artist in complete command of his medium.

Paranoid Park is such an achievement in part because it manages to keep from losing its purpose even as it teeters on the edge of that invisible line where great artists constantly dare to go, and which, if they go too far, they lose their audience. It’s as though the audience senses the self-consciousness behind the artist’s endeavor, and the artist’s intention gets buried under accusations of pretension. Van Sant never goes too far, and yet follows his aesthetic vision with a sense of freedom that even takes him to places yet to be mapped out. This happens most noticeably with the film’s sound, which is where Van Sant is at his most daring. But it happens everywhere else, too, in his playing with the narrative structure and temporal order, even in repeating scenes (always tricky), the use of slow motion and jump cuts, the odd camera angles, the crisp, often mannered dialogue.

One heavy dose of serendipity for Van Sant was in finding a story that would allow him to experiment freely without leaving the narrative behind. Fellow Portland native Blake Nelson’s young adult novel is an excellent choice because it is so spare that that it doesn’t tie Van Sant down. A teenage boy named Alex starts hanging out at Portland’s Paranoid Park, a skateboarder’s paradise of concrete waves and gravity-defying rides. One night, one of the older park denizens asks Alex if he wants to come hop a few freight cars at the nearby railroad yard for fun, and Alex, in the manner of all young boys seeking adventure and acceptance, says yes. While at the yard, Alex accidentally causes the grisly death of a security guard, and then, with almost as little forethought, decides to keep his horrible act a secret. The rest of the film is about how Alex deals with his guilt, as it flirts with the possibility that the police will find out what Alex did during their investigation.

Gus Van Sant is openly gay, and during the film’s first half-hour, one wonders where he is going with the story, which is almost exclusively about young boys. The beginning, which includes a breathtaking montage of lyrical shots of boys twisting their bodies in slow motion in the air, and gliding down the concrete walls of the skateboard park, almost feels like a gay initiation. It doesn’t help that the boy who plays Alex, newcomer Gabe Nevins, has a beautiful, innocent-lookng, angelic face with the androgynous features of a classic object of homosexual desire. And yet, as the movie progresses, especially once the crime is revealed, any feeling that Van Sant’s exploration has merely an erotic impulse fades away as we begin to witness a fusion of the filmmaker and his star, one that recalls Godard’s work with Anna Karina, or Kiewslowski’s with Irene Jacob. These relationships between filmmakers and their subjects are more symbiotic than erotic—the star is more than a character, but a muse, a representation of the artist’s ideas, a mirror that the artist holds up to see himself. Take Flaubert’s famous comment, “Madame Bovary, c’est moi” and put it in the realm of cinema, where the actors are real, breathing people as well as the characters they play, and the synthesis of artist and subject is all the more romantic, corporal, remarkable.

Van Sant found Gabe Nevins, who also lives in Portland, by advertising on MySpace, and the casting of Nevins is another act of serendipity. Gabe Nevins’ acting has a novice’s tentativeness that translates as passivity on the screen, and this works in the film’s favor. Paranoid Park is not about the exteriors of life, what you do when something happens to you; it’s about the interiors, “those other levels of things,” as Alex cryptically says to his friend Macy. Gabe Nevins’ non-emotive performance allows him to serve as a conduit for Van Sant’s own aesthetic journey into those interior places. When the audience finally understands what horrible secret Alex is hiding, Van Sant shows the boy in tight close-up in the shower, face hidden and water running down his hair like a flood of tears, and we hear the sounds of birds and the wind in the trees as an impending storm turns the running water into rain on the soundtrack. Alex’s inner turmoil is revealed without any outward emotion, which makes the privacy of it, the loneliness in it, all the more potent. It is the essence of the emotion Van Sant is getting at, and he expresses it without any overt modes of behavior (theater), but through the magic of film—sound, images, and even the sequence and repetition of images.

And music. Van Sant uses music in so many provocative ways in Paranoid Park that the film would be a mere shadow of itself without the soundtrack. He uses it instead of dialogue to indicate how we should feel about a character; he even overdubs the entire break-up scene between Alex and his narcissistic girlfriend (Taylor Momsen) with a Nino Rota score from Fellini’s Juliet of the Spirits. Break-ups are an out-of-body experience anyway, so why not enhance it? Van Sant’s use of music is so brazen that it feels less manipulative than if it were subtle. He chooses music that already has a history, like the Nino Rota score, to infuse a scene with symbolic meaning. He even comments on his use of music: when Alex is driving to Paranoid Park, Van Sant overlays the same shot with three extremely diverse types of music—hip hop, classical and country—presumably tunes from the car radio. He is telling us that music has this power, and that he is going to use it, just like kids use it all the time, to set a mood, to get them in the mood, to express the mood they’re in.

During the opening dream-like sequence of skateboarders at Paranoid Park, we hear a French pop song as we watch the skateboarders taking flight in slow motion. The song is exotic, foreign, romantic—about as far away from Portland, Oregon as one can get. Music has the transcendent power to take us outside of life when it gets too lonely, too hard; it’s just like what skateboarding does for 16-year-old boys. The use of that French pop song is Van Sant’s way of letting us into the interior lives of these boys, and getting us to leave this earth with them. It’s the mystery, and the magic, of music, of connection through association.

(6323)
$12.49 (as of January 21, 2021 - More infoProduct prices and availability are accurate as of the date/time indicated and are subject to change. Any price and availability information displayed on [relevant Amazon Site(s), as applicable] at the time of purchase will apply to the purchase of this product.)
related posts