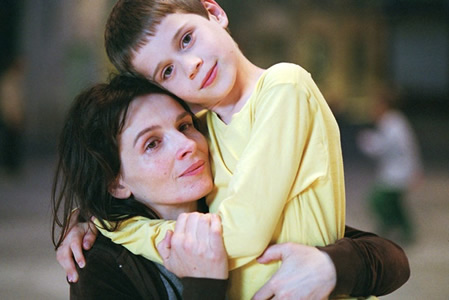 I remember being humorously struck by the response of a friend commenting on the prospect of watching short films: “Oh no, I don’t have the patience for shorts.” The irony of the comment is obvious, and her obliviousness to the irony and conviction of her assessment was comical. That was a few years ago and I think, since then, I may have found a collection of short films that could convert her to the appreciation of the genre. Paris, Je T’aime wonderfully and creatively uses the city that has been appropriately dubbed as “the most romantic city in the world” as the cinematic backdrop for these entertainment bite-size morsels. Producers Emmanuel Benbihy and Claudie Ossard successfully assembled 18 shorts by 21 internationally renowned directors set in a different neighborhood of Paris that come together as one feature film.

Under any other circumstance such an undertaking of bringing together the creative process of 18 directors under one title would conjure up a few proverbial ponderings- too many cooks spoil the broth; too many chiefs …- but Paris, Je T’aime manages to pull it off and with few short-comings (pardon the pun). From a love triangle, slap stick of sorts featuring Steve Buschemi, directed by the Cohen brothers, to a drama of a mother’s loss with the always-effective Juliette Binoche. Out of the 18 there were maybe two or three that were less than memorable.

Not included in the latter group is a wonderfully whimsical portrayal of a mime’s discovery of true love, and the closing short of a middle-aged American lone traveler. The quirky mail carrier’s story, which takes place in the 14th Arrondissment, is a creative travelogue by Alexander Payne. Done entirely as voice over in the style of the French language tapes that the main character learned from, one feels her excitement in experiencing a trip of a lifetime as well as her vulnerability in realizing she has no one to share it with. Once again we’re reminded of Payne’s deftness in characterizations and balancing humor and pathos, even in the limited space of ten minutes.

Although Paris holds the title role in this collection, it never upstages but rather subtly inspires a disparate array of characters that are in and out of love, suffering loss and gaining new experiences. The sign of a good short is when it can make you feel in a few minutes what many feature films can’t do in two hours. Individually, just about anyone of these shorts selections will leave you fulfilled, collectively it leaves you wanting for more. My only wish is that everyone had seen it first during its theatrical release due to the unfortunate subtitling of the dvd release. Larger than necessary and ill-placed, the subtitles diminishes the delightful experience that is Paris, Je T’aime.