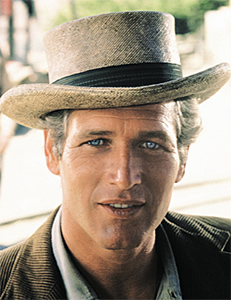 When I was a teenager way back in the 1970s, I had a poster of Paul Newman on my bedroom wall, a life-size picture of him as Butch Cassidy. He was in profile, a cowboy hat tilted just so and jeans fitting just so, and he was chewing on a piece of straw or something. There was also that smirk on his face that you see in so many of his films. Paul Newman was not my first movie crush, and definitely not my last, but he will always be my favorite. He was The One, and his death on Friday, September 26, hit me like a swift kick to the gut.

Most other girls my age preferred Robert Redford, the Sundance Kid, but my taste was not for such pretty boys. Not that Paul Newman wasn’t drop dead gorgeous, but by the time I crossed the threshold into romantic fantasies conjured by gazing at male beauty on the screen, Paul Newman was already entering middle age. He was forty-four when Butch Cassidy and the Sundance Kid came out. As far as my teenage heart was concerned, however, it wasn’t Redford who made it go pitter-patter. For me, Newman was the sexy one.

As much as I loved him as Butch Cassidy, my initiation as an fan of Paul Newman the actor came much earlier. It was The Hustler that introduced me to the aura of Paul, and not inconsequentially, the aura of cinema as well. When I saw that movie, George C. Scott made me shiver, but it was Paul Newman who lit up the screen. His performance as Fast Eddy, the young pool shark who thought he could beat the best of them, was a mixed-up bag of youthful swagger and ignorance. Paul Newman was insolent and yet vulnerable—you were attracted to him and you pitied him at the same time.

Whenever someone asks me what my top ten movies of all time are, The Hustler is always at the top of the list. It’s not the best movie I’ve ever seen, but it’s the first movie I ever saw that made me realize that movies had the power to portray the human condition in all its frailty, its maliciousness, and its power. It was also the first time I saw a woman get drunk on the screen. The Hustler was the first movie to show me the kind of life I knew deep down was out there; a life that looked nothing like an MGM musical, or a Julie Andrews frolic. Because the movie meant so much to me, Paul Newman became a vital part of my still unformed world. And as we all know, it’s your first you remember the most.

I was one of a generation that came to love movies through TV, and it was as an avid late night movie watcher that I saw Paul Newman’s movies. Besides Fast Eddy, I saw him stooped over on crutches as the impotent Brick in Cat on a Hot Tin Roof, or as the barn burner Ben Quick in The Long, Hot Summer, flirting with Joanne Woodward, the prim beauty who was his wife in real life. (The fact that Paul Newman loved Joanne Woodward made him all the more appealing to me.) And of course, Paul Newman’s masculine beauty and sexual tension chew up the screen in Hud, in which he plays a rancher’s bad boy son who in a drunken rage almost rapes the housekeeper, played by Patricia Neal. His swagger gets a little more stooped as the chain gang prisoner in Cool Hand Luke, whose insolence, yet again, inspires admiration as well as pity.

But the performance I think Paul Newman was best in was as the alcoholic lawyer in The Verdict. It was a role that helped define his career as an older man, and it should have won him an Oscar. The Academy did finally bestow him with an Oscar for Best Actor two years later, for his performance in The Color of Money, but it felt like a consolation prize. It was a reprisal of his role as Fast Eddy, and Martin Scorsese directed it, but the Oscar win still felt like an apology for not getting it for The Verdict.

During our mourning of Paul Newman, a lot will be written about his philanthropic achievements. They were substantial, and perhaps in the end, they define the man more aptly than his acting career. But for me, Paul Newman’s face on the cover of a bottle of salad dressing is not the Paul Newman I will always remember. It’s the man on that poster on my bedroom wall.