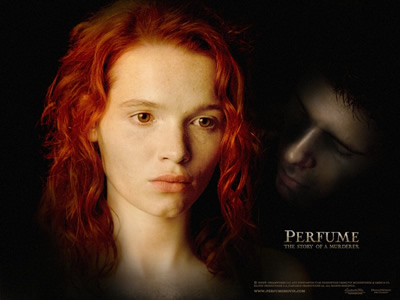 Perfume: The Story of a Murderer is a title as ridiculous as the premise of this movie: a man born in 18th century France has a sense of smell that would put a bloodhound to shame. The grand achievement of director Tom Tykwer however is to turn the ridiculous into monumental cinema. Imagine combining the ambition of Leos Carax, the audacity of Stanley Kubrick, the visual peak of Jean-Pierre Jeunet, the epic imagination of Peter Jackson, and the perversity of Peter Greenaway into one movie and pulling it off in spades. Perfume is a movie of superlatives in every way, which might not be surprising coming from the director of Run Lola Run. Unlike in that film where flash was for flash’s sake, the onslaught of Tykwer’s style here is totally bound in service to the story.

Making a movie about the sense of smell presents an enormous challenge since it has to be conveyed solely through two other senses – sight and sound. Tykwer is up to the task though using his usual filmmaking team. Cinematographer Frank Griebe’s high contrast photography is extremely sharp so that objects stand out vividly in bold primary colors. Production designer Uli Hanisch simultaneously fashions the filthiest Parisian ghettos and the most exquisite perfume parlors. The visual effects department allows Tykwer to open up the space so that he can capture massive 18th century landscapes, both urban and rural. Made for 50 million Euros (currently about $66 million US), the movie looks like it cost much, much more than that. Perfume still needs the audience’s imagination to contribute to the olfactory, but the provocative imagery invite us to do just this. This is as lush and sensual as movies come.

Adapted from an international bestseller by reclusive Patrick Süskind, Perfume is a German-French-Spanish co-production shot in English. With voice-over by unseen narrator John Hurt, it begins with Jean-Baptiste Grenouille (the heretofore unknown Brit Ben Whishaw) in a dank prison with an irate mob outside ready to rend him to pieces. His sentence is handed down in the form of a slow, torturous crucifixion. The movie then flashes back to see how these events came to be. Grenouille was born with a sense of smell so vast, humanity lacked the language to describe all the aromatic nuances available to him. From the moment of Grenouille’s birth in a fish market, death followed him everywhere like a mystical destiny. His peasant mother is hung for abandoning him, the proprietor of his orphanage is murdered in a theft, and on it goes. Life is valued by Grenouille only insofar as it gives him access to new and more enchanting smells.

One night in his late teens, Grenouille comes upon the perfect scent in the form of a beautiful young girl (Karoline Herfurth), but she flees from him. Accidentally killing her, he finds that her scent also fades with her death. In his pursuit to preserve such scents, Grenouille places himself under the tutelage of past-his-prime perfumer Giuseppe Baldini (Dustin Hoffman). In a fantastic scene reminiscent of Mozart showing up Salieri’s welcoming ditty in Amadeus, Grenouille impresses the pompous but apprehensive Baldini by effortlessly concocting perfumes bedeviling Baldini’s decades of experience.

The part that really earns the “The Story of a Murderer” moniker begins when Grenouille sets out to create the ultimate perfume, which requires the scents of thirteen virgins. Extracting their scents however involves murdering them, and he becomes a serial killer terrorizing the town of Grasse. He evades captivity with his sense of smell alerting him to the approach of anyone long before they arrive. His ultimate prize is Laura Richis (Rachel Hurd-Wood), daughter of wealthy Antoine (Alan Rickman), who suspects his daughter is imperiled and marshals all his influence to stop Grenouille.

While Tykwer mostly plays the material straight, the content can’t help but be black comedy that just keeps growing in its colossal outrageousness. The climax, and what a literal climax it is, is one of the most darkly comic imaginable. Despite the pressure from the large budget to make an audience-friendly film, Tykwer shows no inhibitions with the material and this movie goes full tilt all the way. Perfume is a movie of extremes, so a lot of people are going to love it or hate it. It can easily be accused of misogyny and misanthropy. Following its protagonist, the movie takes a tone that’s as cold as Grenouille and the film doesn’t overtly judge him.

The movie is about fantasy and it takes the form of a very dark fairy tale. The contrivance of young beautiful virgins, who in real life do not necessarily smell any better than the rest of us, only make sense as fantasy figures. Grenouille literally objectifies them, stripping them naked before reducing their essence to liquid. Ultimately though, he finds the fantasy is insufficient and that’s where the film finds its moral voice. Agree or disagree, this is a work so bold and provocative and distinctive that it demands to be seen.

(22171)
$3.99 (as of January 25, 2021 - More infoProduct prices and availability are accurate as of the date/time indicated and are subject to change. Any price and availability information displayed on [relevant Amazon Site(s), as applicable] at the time of purchase will apply to the purchase of this product.)

(28383)
$13.99 (as of January 25, 2021 - More infoProduct prices and availability are accurate as of the date/time indicated and are subject to change. Any price and availability information displayed on [relevant Amazon Site(s), as applicable] at the time of purchase will apply to the purchase of this product.)
related posts