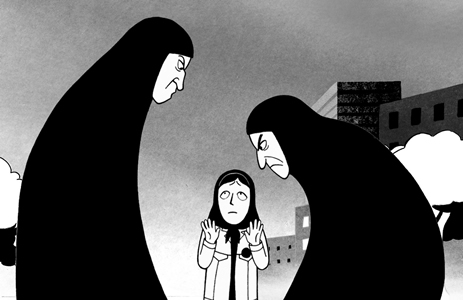 In translating her popular graphic novels to the screen, Marjane Satrapi, along with fellow comic book writer Vincent Paronnaud, has brought her static images to vivid life, while keeping intact all the humor, pathos and emotional honesty that graced the page. Satrapi’s memoir about growing up in Tehran during the end of the Shah’s regime, the Iranian Revolution, the Iran-Iraq war and the rise of Islamic fundamentalism, remains a great personal story, one that is leavened by Satrapi’s perceptive look at the cultural and political forces that shaped it. Persepolis is a spectacular movie, an endless stream of pungent experiences—both ordinary and calamitous—that made up Satrapi’s childhood. These events are rendered in stark black and white images and punctuated with her sharply astute and self-aware observations, delivered in voice-over by French actress Chiara Mastroianni, whose dark vocal tones create a perfect funnel for Satrapi’s deliciously down-to-earth commentary.

Persepolis is an animated film, but even though there is not a live person in sight, it’s an extraordinary visual expression of the human condition. Satrapi describes her animation style as “stylized realism,” where scenes are based in realism, but the images are design-oriented—sometimes almost to the point of abstraction. But this is no distancing device; on the contrary, the stylized images end up heightening the emotional impact of the story. When a young man is shot to death during a police crackdown of a demonstration against the Shah, the blood seeps from the body in a pool of black ink that covers the screen in darkness. By rendering her incredible story in these starkly expressive images, Satrapi not only adds intensity, but also strips the movie of cultural ornamentation, and the story becomes a universal one that we all can relate to, no matter what country we were born in.

The animation is exquisitely evocative, but it is Satrapi’s story itself, and her point of view, that captivates us. Every stage of her life is treated with a clear-headed view of someone who has seen so much, and yet comes out the other end without the anger and need for revenge or bitterness that taints other memoirs. It appears that Marjane took her wise grandma’s advice to heart when she warned her, “There is nothing worse than revenge and bitterness.” It is Satrapi’s willfulness, her fierce independence that made her parents worry for her safety and encourage her to leave Iran for good, but it is her humor and lack of self-pity that has allowed her to not only survive while in exile, but to thrive.

The movie begins with a brief history of the Shah’s rise to power (“The English convinced the Shah to be emperor—in exchange for oil”), and an introduction to Marjane’s own family’s leftist politics (“My grandfather was a Qadjar prince…and also a communist”). Every scene has a political or cultural undercurrent, but is filtered through Marjane’s personal experience, and seeing the complexities of Iran’s turbulent transition from dictatorship to freedom and back to repression through a child’s eyes is both more revealing and somehow less confusing. As Marjane’s grandma bluntly puts it, “This country is a piece of shit right now.” Little Marjane mimics the adults (“Down with the Shah” she shouts in her living room); she talks to God (Allah looks a lot like any child’s vision of God, a bearded old man on a cloud); she witnesses the atrocities of war, and watches as her favorite uncle is sent to prison and finally to his death for his own political beliefs. (It is when young Marjane learns of her uncle’s execution that she finally yells at her bearded God to “shut up and leave me alone.”)

Once it is obvious that Marjane’s spirited independence and tendency to mouth off might get her into trouble under the constant watch of the mullahs, her parents send her to school in Vienna, and Marjane’s experiences as an Iranian teenager suddenly thrust into European punk culture are hilarious. Ditto her first forays into romance. The first guy she falls in love with turns out to be gay, and the second such a jerk that when she finally wakes up from her romantic stupor, she can’t believe she could have been SO STUPID to fall in love with such a COMPLETE ASSHOLE.

After some more bad luck in Vienna, Marjane returns to Iran, which is now fully under the grips of fundamentalist Islam. There she tries to re-integrate, but the price to pay is too high. This time, when she leaves, her mother hugs her and says, “I forbid you to come back.” As Marjane says, with a steadfastness that would make her grandma proud, “Freedom always has a price.”

Marjane Satrapi has lived in France since 1994, and she wrote Persepolis in French. France has similarly embraced her as their own, even selecting Persepolis as its entry in the foreign language film category of this year’s Academy Awards. As ironic as that sounds, it makes perfect sense, not only because the film is in French, but also because the actors voicing the roles are iconic representations of three generations of French cinema. France’s equivalent to Bette Davis, Danielle Darrieux (now 90) voices Marjane’s grandma, Catherine Deneuve is her mother, and Deneuve’s own daughter, Chiara Mastroianni, voices the teenage and adult Marjane. All these fabulous women bring a quintessential Frenchness to their characters through their voices. They aren’t playing immigrants speaking French; they are playing French women. At first, this may seem distracting, but after a while, it feels right. Satrapi is showing us that people are the same everywhere, and this blurring of ethnic lines is part of her intention. She is telling a story that could be about any child from any family in any war-torn country. She is telling us that Iranians are human beings, too, just like the French, just like us.

As much as I loved Persepolis in French, I feel compelled to recommend that Americans watch the English-language version for that very reason—to be reminded that people are the same everywhere, even under the veil. With a solid cast announced, the English version might be just as good as the French one. Both Chiara Mastroianni and Catherine Deneuve, who also speak English, are reprising their roles; Gena Rowlands will be grandma and Sean Penn will voice the father.

Whichever version you choose, go see this movie. You will laugh, you will be moved to tears, and you may even come away thinking the human race might actually survive without killing each other off, because there are stories like Persepolis to remind us that, deep down, we’re all pretty much the same.