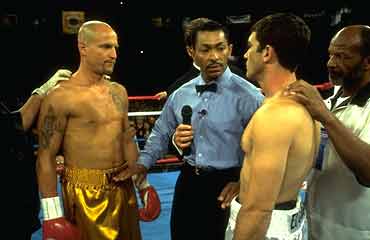 Ron Shelton is a brilliant, if uneven, filmmaker, yet his films are so modest, it’s easy to overlook his originality. In his best work – Cobb, White Men Can’t Jump, Bull Durham – he’s completely retooled the sports film. He shuns both the inspirational uplift of Rocky and the squalid brutality of Raging Bull. His wry, exhilarating comedies are about aging athletes who never quite made it and the ways they learn to live beyond their games. Because he doesn’t much care whether anyone wins one for the gipper, he ducks the bombast and sentimentality that render most sports films three hankie weepies for Pabst drinkers.

In Play it to the Bone, Woody Harrelson and Antonio Banderas play boxers who are long past their primes. Best friends who train together, they luck into the undercard fight for a Mike Tyson bout and the promise of a title shot for the victor. They take off for Vegas, accompanied by Banderas’ girlfriend, Lolita Davidovich, who was once involved with Harrelson. Along the way they bicker, reveal how they blew their shots at the big time, and vie for Davidovich’s favor. Once the fight arrives, we’ve lived with them long enough to know just how much is at stake for them both.

Shelton finds the rhythms for his films in the sports they depict. White Men Can’t Jump has the heedless, frantic momentum of pickup basketball; the lax Tin Cup feels like an aimless afternoon of golf. Play it to the Bone follows suit: a bloody, exciting first round, followed by a drawn out sparring match where the opponents feel each other out, ending finally with a flurry of action. Like any good boxing match, we’re attuned to who has the advantage at any given moment, and the thrill is in watching how Banderas and Harrelson score points off one another before they ever meet in the ring.

The film is at its best when it plays with the conventions of the buddy movie. These films usually posit an adolescent dream world where boys can be boys, and a conveniently available woman (just one: our boys share) exists just on the outskirts of the action, there only so that the audience doesn’t get the wrong idea about the nature of the pals’ relationship. Shelton skews this by making the woman the central, decisive figure – she’s no one’s sex kitten – and then, more daringly, by explicating the implicit homoeroticism of the genre. After losing an important bout, Banderas explains, he "became a fag for a year." His casual acceptance of the experience infuriates (and intimidates) Harrelson, whose shocked tirade is one of the funniest scenes Shelton’s ever written.

This revelation haunts the rest of the film, and when the men finally box, in a brutal, endless, all-too-evenly matched bout, they’re really working out their feelings for one another. Shelton offers us an easy resolution (the weak apology we expected from the beginning) but then undercuts and complicates it with two powerfully ambiguous shots, one of which closes the film on a lingering, unresolved note.

Shelton claims Preston Sturges and Sam Peckinpah as his primary influences, and his work is an unlikely amalgam of their ill-matched styles. His dialogue has the rapid-fire precision (and paradoxical loopy illogic) of Sturges, as well as its caustic, explosive wit. Like Peckinpah, his films revel in physicality: the way a character shoots a free throw or holds a clinch in the ring is as defining as any dialogue. His feel for rhythm derives from Peckinpah’s urgent plasticity; it’s no surprise that his editor, Paul Seydor, wrote an authoritative study of Peckinpah’s Westerns.

Yet for all his gifts, Shelton’s never made a film that lives up to its best moments. There is too much turgid exposition, too many underdeveloped characters. His ear for dialogue, normally blessed with perfect pitch, turns tin whenever characters start to discuss a relationship. He lards his films with pop songs that too often do the emotional work the screenplay hasn’t managed.

Play it to the Bone shares all these problems. It turns mechanical when the characters reveal their backstories. We can hear the plot points falling into place with a deadening thud. The music, mainly great tunes by the likes of Los Lobos and Moby, works too hard to carry the film. And when a choir kicks in under the fight, it’s simply ridiculous.

Lolita Davidovich gets all the worst lines, and we never get a sense of why she’s drawn to both men. She struggles gamely with the material but never finds a convincing tone. Tom Sizemore does his standard turn as the boxing promoter. He screams every line, bugging his eyes now and again for further emphasis. And Robert Wagner seems to have forgotten his charming work in the Austin Powers films. Rather than parody himself, he acts. Poorly.

Play it to the Bone is, finally, typical Shelton: a fearless, hilarious, completely original mess.