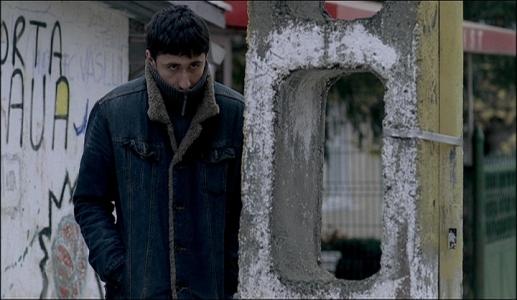 Police Adjective is a small, gray movie from Romania with a long tease and an iron sting in its tail.

But director Corneliu Porumboiu is so stringent with what little action he shoots, mostly in real time, that only fans of Romanian New Wave cinema will know what kind of sting to expect.

Cristi is the unwilling undercover cop ordered to mount a sting to nail a student who has been sharing a joint with two classmates. For a crime that carries an outsized seven-year jail sentence, Cristi must endure stakeouts in schoolyard and street corners, through cigarette after cigarette, before heading home to a lonely supper and failing marriage.

Poor Cristi’s life could not be drearier and the suspect’s background is many times more affluent and comfortable than his own. Yet Cristi believes the law is about to change and that the size of the sting and ensuing punishment scarcely fit the puniness of the crime.

As Cristi, Dragos Bucur is dogged and stoical, dark eyes betraying just a glint of wounded youth when his wife Anca refers to the breakdown of their marriage in passing while casually taking a swipe at his grammar. His hard-line boss is Vlad Ivanov, recognizable to Romanian New Wave buffs as the thuggish abortionist of 4 Months, 3 Weeks and 2 Days.

In Cannes winner Porumboiu’s art house satire, colors are drained and dull, shots are long and static, sound is muted and music-free – all features of new wave realism, a resolute stand against romance or not telling how it is, and all mirrored later in a curious argument between Cristi and his wife over pop song lyrics. Cristi wants songs to tell the truth, literally, just as he strives to in his case reports.

The new Romania of Porumboiu’s earlier 12:08 East of Bucharest is back here, as is its protagonist. Over and over, the police station corridor is lingeringly revisited in all its gray-blue and gray-green non-romance, then its offices in silent, unmoving frames. It’s as though the director is striving to make a movie as unlike Avatar as can be imagined, and succeeding beyond his wildest dreams. We are in a country whose citizens argue about changes in language and tastes in songs, and yet the old country lives on in the way a woman still beats her carpet and in the way the police station still runs the city.

When Cristi is forced to speak his mind about conscience, law and the police, his old-regime boss forces him to ingest the meaning of “police” and to go by the book, quite literally. In his case the book is a fat Romanian dictionary from which the boss requires him to read lengthy definitions for “conscience,” “law” and “police.” In this police procedural, a wry and ironic take on the word “police” follows a perusal of the word ‘conscience’ and other problematic words that have landed the recruit in front of his heavy-handed boss.

“Police run the city,” declaims the boss using one definition, adding that it’s the same everywhere. But is it? According to the Romanian dictionary, ‘police” comes from the Greek root polis, also meaning “state.” The Romanian police station, with its overblown bureaucracy and cold walls, is indeed a police state of monstrous tedium and absurdity.

Masterful and Kafkaesque, the ending of the sting operation carries its own sharp shock and delivers the pay off. What you see is what you get in this state, and at the same time there is more to this film than meets the eye.