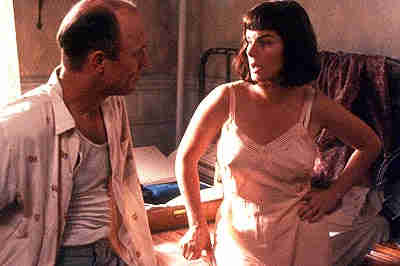 The story is told that eight year old Jonathan Chang, who gives an astonishingly poised performance in Yi Yi, was asked if he wanted to be an actor when he grows up. "No," he replied, "I want to be a director." A perfect actor’s answer to a patronizing question.

Ed Harris, an adult performer with a quarter century of ever-better acting under his belt, makes his directing debut with Pollock in which he stars as well. There’s no question but that Mr. Harris has grown up. Pollock is an accomplished and thoughtful film, one that not only gives no hint of being a first work, but surmounts challenges in its subject matter that would have phased many a seasoned director.

Pollock is based on the Steven Naifeh/Gregory White Smith biography of Jackson Pollock, the great American painter of the 20th century who was also a self-destructive neurotic and an alcoholic. Starting with a brief glimpse of him at a pinnacle of his success, with a fan asking him to autograph a "Life" magazine spread on his work, Harris, with paint-stained hands and haunted eyes, foreshadows the tragic story behind the artistic triumph. Immediately flashing back to 1941, Pollock doesn’t waste a minute disclosing the drinking problem: Pollock on a bender, returning to the Greenwich Village walkup where he was living with his brother and sister-in-law.

Lee Krasner (Marcia Gay Harden in a stellar performance), also a talented young painter, seeks out Pollock out of interest in his work. She sees both the brilliance of his paintings and the vulnerability of the man. They become lovers (ultimately marrying) and Krasner devotes herself to promoting Pollock’s career. Recognition comes from art patron Peggy Guggenheim (Amy Madigan), but Pollock continues to be plagued with insecurities, depression, binge drinking, and associated misbehaviors–like drunkenly pissing in the fireplace at a party at Guggenheim’s townhouse. Krasner becomes his refuge. They move from New York City to The Springs on Long Island; their closeness to nature there is an inspiration to Pollock and a period of sobriety is also a period of creative productivity. But Pollock never fully escapes his demons and a tragic ending comes as no surprise.

What fills out this skeletal story is a wealth of incident and dialogue, fleshed out by insightful characterizations achieved through the fine acting of the ensemble cast. The details are telling. When Pollock first sees Krasner’s work, he runs his hand (without touching) over the canvas, as if he sees the work through his painter’s hands. "You’re a damn good woman painter," he declares, unaware of the implications of his qualifier. Their first approach to lovemaking is shot with Pollock in the foreground, Krasner at the end of a dark hallway, silhouetted against the dim light from the bedroom as she starts to undress. It’s a fresh and beautifully composed moment (cinematographer: Lisa Rinzler). At a family dinner, conflicts and resentments bubble up and Pollock desperately turns on loud music, as if to drown out reality, as his mother (Sada Thompson) sits at the table impassively.

There is talk about painting, too, discussions of abstraction and where art comes from. And there are other painters and critics of the period who were also players in Pollock’s drama.

But most extraordinary are the scenes of Pollock painting. When Guggenheim commissions a mural for her town house, Harris shows us Pollock stretching the huge canvas, the lighting set so that his shadow is thrown large acrossthe blank fabric. He thinks, inspiration comes, and he makes broad sweeps of his brush, sweeping paint onto the canvas with charged energy, vigorously applying black and blues and yellows on the vertical, slashing across with bright red horizontals. The movement is rhythmic, with the grace of an athlete, enhanced by the original score by Jeff Beal–it is like painting as a glorious dance of creativity.

If great art comes from the very soul of the artist, then the great art that Pollock produced was somehow metamorphosed from the profoundly troubled spirit of the man. His unhappiness was lamentable, but his resplendent paintings are a superb artistic legacy. Ed Harris’ Pollock is the best film ever made about a painter.