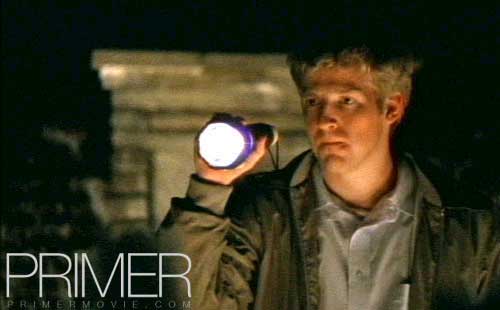 Primer arrives with gobs of hype and the Grand Jury Prize from Sundance. Either the pickings at Sundance were slim or the jury was sucking in something more than the mountain air, but this little film cannot be put in the same category with previous Grand Jury Prize winners.

Praised for being made on its tiny $7,000 budget, the film doesn’t look or (especially) sound like any more than that. The sound recording is of poor quality, so that the already somewhat arcane dialogue often is difficult to hear, no less understand. Repeatedly, dialogue is drowned out by the sounds of passing traffic, a fountain of roaring water, or running machinery. The tinkly electronic music soundtrack (credited to the the producer/writer/director/star/cinematographer/editor) offers further competition with the dialogue, but none for John Williams, rest assured.

The story is a classic from the sci fi genre. A couple of techies, Aaron (Shane Carruth) and Abe (David Sullivan), working in the garage of Aaron’s home, are trying to come up with a hot new product that will get the attention of the deep pockets of venture capitalists. (At least there is no pretense to pure science here.) Accidentally, they develop a time travel machine which allows them to guarantee some stock market profits, but also presents the problematical complicating anomalies of time travel. The latter have been explored in many a thoughtful science fiction novel.

Carruth brings nothing new to the table here in terms of theme and since he doesn’t bother with any character development, there’s precious little to fill even the blessedly short 80 minute running time of the movie. A great deal of the dialogue is technical gobbledygook which has left viewers puzzled and confused, but that might have been forgiven had the narrative and sequence of events been presented with any clarity. Anomalies of time travel can be notoriously difficult to follow (like calculus for the math challenged), but further obscuring the story with muddy exposition fully defeats the film.

Shot in Super 16mm and later blown up to 35mm, Carruth does succeed in giving the film a distinctive visual look–overexposed, somewhat grainy, sometimes drained of color, other times using color for attractive effect, and he has a good eye for framing his shots. The less said about the self-conscious performances, the better.

The Grand Jury Award for Primer is an embarrassment for Sundance. This is a film at the undergraduate film school level, not one that should be sold to moviegoers paying the full price of a ticket.