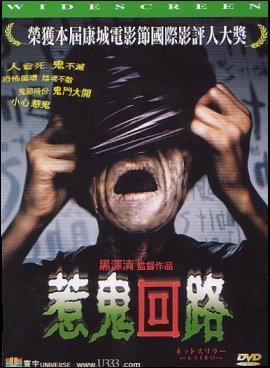 A somewhat over-hyped indie film of the current season, Pulse is a psychological horror film, purportedly of the most sublime order. It entails an unexplained take-over of the world (that is, living human beings) via a computer software program, which allows ghosts to access the living through the Internet. A group of young people in Tokyo (some are university students, some work for a commercial nursery) find their sense of isolation and fear mounting, as first one friend, then another commits suicide, disappears, or turns into shadowy black powder against a wall or on a floor.

Pulse is filmed almost entirely in murky tones, even though many scenes consist of white backgrounds. Interiors, illuminated by dim, indirect or cloudy-skied lighting, include white-walled apartments, computer labs, a grocery market and other public spaces bathed in fluorescent lighting. Exterior shots take place on cloudy days or at night. Even abandoned warehouses and factories manage to be fully, if dully lit. After a while, the key visual motif of ghosts&#150;as veil or shroud&#150;emerges. Indoor spaces often appear more open than they really are; walls of glass or gauze curtains separate. The nursery greenhouse on a rooftop is enclosed in glass and potted trees outdoors are wrapped in a protective gauze. During moments of drama, filmy plastic sheets suddenly billow in front of an actor, where none had been a moment ago. The opaque white screens of the world of the living mirror the dark screens of the ubiquitous computer monitors. As the world depopulates, ghosts seem to be spying everywhere. Indeed, the proliferation of the haunting, all-seeing computer eyes conspires to create an atmosphere, paradoxically, of indolent creepiness.

Much of the film follows Ryosuke Kawashima (Haruhiko), a kind of clueless young man, who refuses to contemplate death. Each of the other characters has his or her soliloquies speculating about death or expressing a desire to know death. Over time Harue Karasawa (Koyuki) emerges as the mostly asexual, could-have-been love interest for Kawashima. Both have panic attacks, swoon, look dejected, and otherwise act out the motions of youthful lebensangst. But the film is far too metaphorical for any real flesh-and-blood human emotions. The film&#146;s primary intent seems to be to transform contemporary computer-manic society into a metaphysical metaphor. Even as people disappear, the lights are always on, desktop computers switch themselves on and launch connections to the web, empty subway trains speed through the night automatically, all of this an elaborate ghost-in-the-machine metaphor, in which the ghosts seek to escape the machine.

The timbre of Pulse seems to echo the all-out dread-fear of Cold War-era nuclear holocaust films of the 1950s, but via the revisionist route (as taken, for example, in the New Zealand film The Quiet Earth back in 1985). One again, mankind&#146;s technological genius proves its undoing, and leads to an almost instant global depopulation. And like The Quiet Earth, Pulse dwells on the psychological dimension of human loneliness, offering metaphors for the human condition in the soulless modern world.

The pace of the film seems far too slow. The special effects sometimes fall terribly short. One visual trick repeated with painful frequency is the insertion ofblack shadows onto the screen. To the audience they appear obviously fake digital enhancements. In time, the conceit of dividing the world up into the real and the supernatural falls short, collapsing into clever manipulations possible in virtual or digital reality, but not in the real world. Unfortunately, even the technology, employed to aesthetic end (slow dial-up, jerky movement caused by poor data-streaming), creates less a sense of visual poetics than of out-of-date-ness.