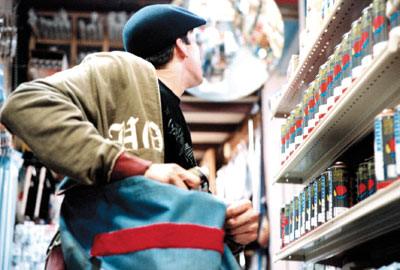 First-time Bay Area indie film-maker Benjamin Morgan brings the passion of his artistic vision and the political insight of his personal experience to the screen in the critical and compelling story of two young graffiti artists trying to survive in the world. Mike (Lane Garrison) and Curtis (Brian Burnam, who co-wrote the screenplay) are best friends, typical "at-risk youths" in the urban underbelly of San Francisco&#146;s hard-scrabble Mission District. Both are compelled to artistic expression and manifest it in the only way they know, as graffiti artists. Once arrested for vandalism (i.e., spray painting on what Morgan dubs the "urban canvases of concrete and steel"), Mike and Curtis find themselves at odds with each other as well as the law.

Director Morgan brings his personal cinematic best to bear in Quality of Life. Having chosen to forego making a documentary about the plight of America&#146;s urban poor and the culture of victimization which traps poor youth (ands transforms them into "at-risk" statistics), Morgan and Burnam explore in intimate and affectionate close-up the actual details of two very plausible working-poor youths. "Pops" (Mike&#146;s father) owns his own house-painting company and both young men work for him as day laborers. "You gotta learn The Work Ethic" if you want to survive, Pops admonishes them, when he moves quickly to fire Curtis, as soon as the youth&#146;s nocturnal spray-painting sessions bring him to the attention of local law enforcement. (For the working poor, the truth is pretty simple: One moment on a police blotter, an eternity as a "problem" in the eyes of the law.)

Interwoven in the backdrop of material despair are flashes of spiritual and aesthetic genius&#151;the sand-painting of an artist-mentor friend, the grace of Curtis&#146; girlfriend Lisa, the montages of the Mission District by day and night, and visual and metaphorical perspectives offered by the cool, and foggy Olympian heights of Bernal Heights Hill, benignly smiling over the inhabitants of the sunny valley of the Mission.

Mike tries to keep his nose clean. After all, as he tells his father in anger, he has had "all the advantages" someone of his social class can hope for&#151;a present father, a grandmother, a stable home, and lots of love. Curtis lives with a girlfriend and, as her young son says, Curtis "is the best dad I ever had." Despite endless promises to be there for Lisa and her kid, Curtis is unable to be present for himself. As he begins to act out the inarticulate rage and frustration and incomprehension which cripples him internally, he becomes lost. As Mike and Curtis make very different choices, both in how they seek to express themselves as well as how they struggle with or against the severe limitations of their social status, their story becomes greater than the individual parts. More by accident than design, this film cleverly conveys contemporary indigenous San Francisco hip hop culture in a visual language highly reminiscent of Italian neorealistic cinema verite

Quality of Life makes for both a highly satisfying and educational film-going experience. Knowing that the young film-makers had very limited financial resources, are truly independent (in fact, autodidacts), and could so richly transform the raw materials of their own circumstances, Quality of Life points to what could be the start of highly promising careers in film for Benjamin Morgan and Brian Burnam. May their vision burn bright, their passions not be diluted, and may they steer clear of the pitfalls which befell Damon and Affleck before them.