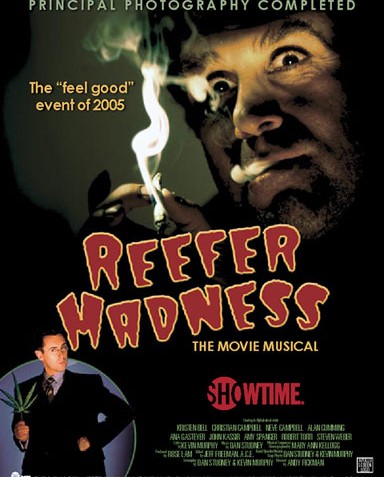 Based on the stage play inspired by the 1936 cult classic anti-marijuana propaganda film, Reefer Madness: The Movie Musical goes through its paces as the (re-)made-for-premium-cable network production it is. Screenplay writers Kevin Murphy (also lyricist) and Dan Studney (also composer) succeed best when adapting their play, originally staged as live productions in New York and Los Angeles, to cinematic space. It is visually stunning, cinematically complex, populated with hammy acting, a Tarantino-like catalog of cinematic quotes, and, alas, some rather insipid songs and overwrought plotting.

The squeaky-clean chaste lovers, Jimmy Harper (Christian Campbell) and Mary Lane (Kristen Bell) are reading Shakespeare&#146;s Romeo and Juliet for the first time, imagining a happily-ever-after for themselves. Foolishly, they have failed to read the play to the end and so have no idea what fate lies in store for either couple. Brad and Janet and the Criminologist (from Rocky Horror) haunt this camp contrivance.

First Jimmy, then Mary is seduced by Jack Stone (Steven Weber), a zoot-suited, tap-dancing, girlfriend-beating, dope-peddling pied piper, the pivotal figure who propels the plot, from one absurdity to the next visual fantasy, from one dance quote (a full-color Busby Berkley tribute) to another (Michael Jackson&#146;s dance troupe of Thriller in a backyard hemp garden, where dancing dope fiends morph into zombies). The primary story line takes an occasional break, to delve into life at Jack&#146;s house, with his loyal, long-suffering moll Mae Coleman (Ana Gasteyer gives the best performance of this production), blond bombshell Amy Spanger (Sally DeBains),who is saddled with an unwanted basket full of crying baby, and Animal House-like social parasite sidekick Ralph Wiley (John Kassir). Soon Saturday Night Live humor meets South Park ethos. Even though Jimmy is wooed and wowed by naked dancing Jesus (Robert Torti) in Las Vegas heaven, it is not enough to persuade the young Romeo to give up drugs. This is evil weed indeed.

Much of the film&#146;s camp derives from the original exploitative shock elements, the historical con artistry of Dwain Esper (parodied by Cumming&#146;s Lecturer) and other circumstances surrounding the original 1936 film. A red-baited Polish-American John citizen and a suddenly frightened Chinese-American woman in the school auditorium audience serve as deconstructed stereotypes. An extensive body of original documents and historical background material on the companion web site explicate the xenophobic panic of the 1930s. The film suggests a subtext of political commentary on today. Las Vegas Jesus (echoing Monty Python), references to FDR as an enemy of the state, and fundamentalist shilling fast-forward the audience to today&#150; &#147;Gee, maybe America in 2005 is not all that different from 1935&#148; (wink, wink, nudge, nudge).

Reefer Madness: The Movie Musical is cinematically flashy, witty, fast-paced, and completely over the top. Like a &#147;low-carb&#148; banana sundae, it is pure entertainment, to be enjoyed with or without the guilt.