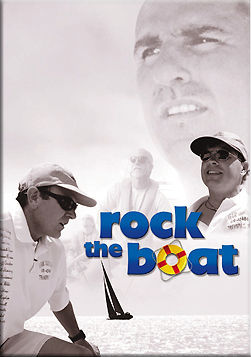 The Amfar AIDS Handbook: The Complete Guide to

Being Positive: The Lives of Men and

Living Proof: Courage in the Face of AIDS

Godforsaken Sea: Racing the World’s Most

Rock The Boat, a film by Bobby Houston, is a great piece of kinetic art, a movie that puts you right in the middle of a 10 day, 2,250 mile TransPac yacht race from Los Angeles to Hawaii. The camera is hand held by Houston who was pulling regular two and four hour sailing shifts at the same time that he was filming the documentary. The result is a wave-like motion to the camerawork that gives viewers the feeling of half queasiness, half exhiliration that was a constant onboard this epic voyage.

There is a great deal more to this film. The yacht Survivor was crewed entirely by HIV positive yachtsmen, chosen for their knowledge of the sea as well as their ability to get along in grueling conditions. We meet each member, find out about his entry into the HIV world, his despair upon finding out the news, and then, in every case, his discovery that HIV is not a death sentence. Certainly that was the reason underlying producer Rob Hudson’s desire to make this film: to demonstrate that people who are HIV positive have the same chances at greatness as anyone else.

This is not just a feel good film. The sailing footage is fascinating, the difficult crewing decisions heart wrenching ("How do you tell someone who has AIDS that he didn’t make the AIDS boat?"), and the approach of Hurricane Dolores a constant worry, adding dramatic tension to the film. Making the viewer feel like a participant in the crew’s struggle is a powerful accomplishment for a documentarian who does not have the luxury of a script to fall back on. Houston shot over 100 hours of tape and logged 2,000 hours in the editing room. His diligence paid off.

The members of the crew are not actors. No one person stands out over any other, but the voice of reason definitely comes from the ship’s cook, Ted Taylor, often caught in the middle between the temperamental captain John Plander, and Rob Hudson, seemingly the voice of reason. Rock The Boat brings to the surface many psychosexual issues that are part of the gay world. For example, Plander views the men who are not experienced sailors as lesser men – ‘faggots,’ in his words – and is not afraid to say so. That these and many other smaller issues did not explode into open conflict is a testimonial to the captain and this amazing crew.

Survivor did survive. It finished 19th out of the 37 boats that began this 1997 race. Rock the Boat is a loving and exciting tribute to the courage exhibited and accomplishment achieved during those two weeks in the Pacific. – DAK