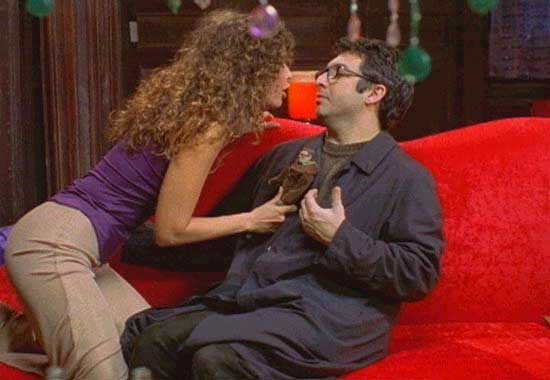 A voluptuous twentysomething somehow transforms a neurotic screenwriter into a national TV star in Samy y Yo, a colorful comedy from Argentina by Eduardo Milewicz. Milewicz, who directed and shares screenwriting credit with Carmen Lopez-Areal, manages to spin this implausible, preciously wacky premise into a fun and often charming tale about insecurity, identity and love.

Kind of a mish-mash derivative of Woody Allen, Pedro Almodovar and EdTV, Samy y Yo stars the appealing Ricardo Darin (an extremely popular Latin American actor who has yet to be discovered by America) as Sammy Goldstein, a nebbishy writer who&#146;s pushing 40, fed up with peddling jokes to a shlocky TV comic, and hopelessly stalled in writing the Great Argentine Novel.

His relationship with his overly literate girlfriend Esther (the funny Alejandra Flechner) is at a standstill, his whiny sister (Alejandra Darin) needs money for her son&#146;s bar mitzvah, and his mama (Henny Trayles) simply personifies the classic kvetchy Jewish mother. But his world changes suddenly one day when the gorgeous Mary (Angie Cepeda), accosts him on the street, thinking he is her father&#146;s psychiatrist who has done her wrong. She doesn&#146;t go into details, and it&#146;s not until after she&#146;s literally beaten him up that she believes he&#146;s the mild-mannered writer he says he is.

Thrilled to discover that he works in TV, she shows up at his studio, where she somehow (again the "somehow" &#150; Milewicz really does test our suspension of disbelief) ends up a producer, having somehow convinced the program&#146;s creators to let Samy take over as star of his own reality-type show. Samy, of course, protests in his low-key way, but Mary proves right. The audience loves it when Samy lives his own depressing life onscreen. He doesn&#146;t even write the show anymore, because viewers simply eat up his ad libbing, how he complains over life&#146;s constant, nagging troubles. His mom even guest stars, and is a popular character on the program.

Samy becomes a household name, and billboards plastered with his image are all over town, but of course his happiness doesn&#146;t last long because ratings fall when the public resists the new, successful Samy. In spite of having insufficient explanation about Mary&#146;s past, which keeps her from being entirely believable, Samy y Yo wins with its delightful details, from the dry witted Esther, who provides spot-on satire of self-satisfied intellectuals to the pleasantly, and surprisingly underplayed party scene at Samy&#146;s nephew&#146;s bar mitzvah.

Marcelo Camorino, director of photography, and Daniel Gimbelberg, art director, capture an eye-catching Buenos Aires on film &#150; from both Samy&#146;s desultory and Mary&#146;s giddy perspectives. Mary&#146;s home decor radiates in shocking pink and orange, and she sits on a bright red sofa that&#146;s shaped like a pair of poofy lips. In the end, Samy y Yo is like a big, friendly kiss.