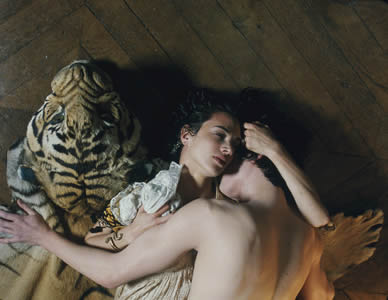 Residents of the San Francisco Bay Area who receive only rations of world cinema much of the year can load up on it with a two-week feast, at 24 frames per second, when the San Francisco International Film Festival returns April 24 to May 8. Now in its 51st year, the festival will screen 177 films from 49 countries, and because the festival’s picks are usually esoteric, you may never get a chance to see many of these films ever again, at least not on the big screen.

As every year, most of the film screenings are held at the Sundance Kabuki Cinema in San Francisco and Berkeley’s Pacific Film Archive. The obvious crowd draws, including opening and closing night films and tributes, will take place at the larger Castro Theatre. Tickets may be purchased a number of ways, and that information is available online, at https://www.trilogyticketing.com/sffs/.

The 200-page program guide, with full summaries of all of the films, as well as information on awards ceremonies and parties, is now available for free at the offices of the San Francisco Film Society (21 Mesa Street, Ste. 110, the Presidio), and will be available at the Kabuki during the festival. The mini-guide version, with truncated summaries, can be found at various venues and movie houses throughout the city. A safe bet is one of the several Landmark movie theaters in the city and the East Bay. Online versions of both guides are also accessible at http://fest08.sffs.org/.

Reading the thick program guide is a formidable task, especially when trying to figure out which films are must-sees, which are might-sees if they don’t conflict with screening schedules of the must-sees, and which are might-sees if the must-sees are already sold out. So, for those of you who crave it, or at least tolerate it, here is a selection of films that have already created a buzz, as well as some suggestions the festival programmers made during a press conference to unveil this year’s program to the public on April 1st.

The Opening Night film is French director Catherine Breilllat’s (Fat Girl) latest exploration of female sexuality, The Last Mistress, and stars the always sexually courageous Italian actress Asia Argento. Miss Argento has two other films in the festival—Go Go Tales, Abel Ferrara’s ensemble piece about life at a strip joint (also starring Willem Dafoe, and there are rumors of an infamous scene with a Rottweiler); and The Mother of Tears, an orgiastic witch fantasy directed by her father, the Italian horror film director Dario Argento.

Mike Leigh is this year’s spotlighted master filmmaker, and in tribute, the festival will show his 1999 film Topsy-Turvy, a backstage look at the creative tribulations of the British musical theater’s most famous duo Gilbert and Sullivan.

The festival also pays tribute to actress Maria Bello with an onstage interview, followed by a screening of her new film The Yellow Handkerchief, a tale of lost love directed by Udayan Prassad (My Son the Fanatic, Gabriel and Me), which also stars William Hurt. Screenwriter Robert Towne will also be on hand for a tribute, and his 70s film satire about Hollywood, Shampoo, gets screen time as well.

Film Comment editor Kent Jones will conduct an onstage interview of long-time Village Voice film critic J. Hoberman, who is being honored for his contributions to film writing. To follow their conversation, Hoberman has chosen a new film by Mexican filmmaker Jose Luis Guerin, In the City of Sylvia, presumably the kind of convention-bending cinematic experience that suits Hoberman’s taste for the extraordinary.

Errol Morris’ latest work, Standard Operating Procedure, a documentary about the U.S. military’s unorthodox torture tactics at Abu Ghraib that shocked Cannes’ audiences last year, will also be shown. Mr. Morris will also be at the festival for an onstage interview with Kent Jones.

Among the 48 other documentaries being shown, a few were mentioned at the press conference: Flow, For the Love of Water, a straightforward look at the inevitable water shortages that threaten our future; Up the Yangtze, about the effects of the massive Three Gorges Dam on rural life on the Chinese river; Stranded, about the survivors of a Chilean rugby team whose plane crashed in the Andes in 1972; and Dust, a wry natural history of the nearly invisible particles of proto-matter that fill up the universe; another Johnny Symons documentary about gay culture, Ask Not, which focuses on gays in the military; and Secrecy, a film about what the government doesn’t want us to know.

The Festival will also screen contributions from the Bay Area’s extremely diverse filmmaking community. The documentary Cachao: Uno Mas, a loving tribute to the legendary Cuban musician Israel “Cachao” Lopez (whose death just a few weeks ago at the age of 90 makes this film, which includes interviews of Cachao, all the more vital as a record of a great musician’s life); found-footage collagist Craig Baldwin is back with another wild experiment in cinematic grammar, Mock Up On Mu; and the festival marks the world premiere of Touching Home, the debut feature by local filmmakers, and identical twins, Logan and Noah Miller. The twins also wrote and star in this homespun family drama, which also features Ed Harris and Robert Forster.

New directors from places farther away also get their due. Valse Sentimentale, an unflinching look at the open wound of young love, is the feature debut from Constantina Voulgaris, a young woman director from Greece. Emily Hubley, daughter of pioneer animators Faith and John Hubley, blends animation and live-action in The Toe Tactic, a metaphysical fantasy about a woman’s search for connection. Former Cahiers du Cinema contributor Mia Hansen-Love’s first feature, All is Forgiven, is already a critical success in France. Festival programmers also mentioned Shadows in the Palace, Ballast, Sleep Dealer and Water Lilies as standouts.

Last, and perhaps most anticipated, are the narrative features of established directors from around the world. To name just a few: the international premiere of The Warlords, another visual spectacle by Hong Kong’s master of martial arts films, Peter Chan; Glasses, a Japanese film about sensory experience as it is savored at a strange beachside resort; Hungarian director Bela Tarr’s latest hypnotic visual metaphor, The Man From London; Lady Jane, a contemporary film noir by the iconoclastic Marseillaise director Robert Guédiguian; last fall’s Venice Film Festival’s top prize winner, Still Life, the latest film by one of China’s brightest young directors, Jia Zhang-ke; new films by David Mamet (Redbelt) and Claude Chabrol (A Girl Cut in Two); Alexandra, another visual and aural poem by cinema’s uncompromisingly lyrical Alexander Sokurov; another musical film by Carlos Saura, Fados, which explores the Portuguese song genre the film’s title refers to; and perhaps the last feature from cinema’s master moralist, Eric Rohmer (The Romance of Astrea and Celadon).

The films mentioned here are just the tip of the iceberg, and not necessarily the cream of the crop. That is for you to decide. And remember, there’s a film somewhere in the festival that’s just waiting for you to discover, a film that could change your life. Like the one I just read about on page 140 of the program guide. Now that’s my kind of movie.