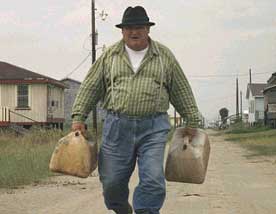 Schultze Gets the Blues is the first feature film for German writer/director Michael Schorr and it should be the envy of far more experienced moviemakers. Setting its own leisurely pace, it is a film that takes the ordinary and makes it extraordinary both in its thoughtful take on its characters and its brilliantly artistic filmic eye.

Schultze (Horst Krause) is shown with his two friends, all grim-faced and wearing hard hats, descending in an elevator into the depths of the salt mine where they have worked for years. From the get-go, Schorr’s camera finds beauty where others wouldn’t even think to look — a shot of the heavily textured mine wall becomes an expressionistic abstraction, a well-used coffee maker sitting on a small table becomes a classical still life, the pitch black of a mining tunnel is briefly illuminated as a mining vehicle goes around a curve. Schorr doesn’t force any of this in a pretentious way; he simply lets his camera linger as he tells his story.

Schultze has been pushed into early retirement and the film follows him through the paces of his working-class, small town life. He putters in the little garden of his modest home and polishes up the kitschy garden elves and Santa Clauses placed there. With his friends, he fishes off a bridge as noisy freight trains clatter by. He dines alone at home, he naps on the living room couch, he argues with his opponent at the chess club. The radio announces: "Here’s the traffic news: there is no traffic news."

Schultze plays the accordian–traditional German oompah polkas. When he hears a Lousiana zydeco band on the radio, though, he is captivated and he starts practicing the faster, more syncopated beat. Something new, something different. When he plays the zydeco tune for the folks at the old age home where his mother is vegetating, only Frau Larant, a free spirit, is responsive. And when he plays it at the 50th anniversary celebration of his local music club, only his friends are supportive.

The club awards him with a trip to a polka festival in Moulton, Texas amd Schultze goes off on his quest. The festival is more of the old and Schultze is seeking zydeco, so he rents a boat and goes off into the bayous, following what has become his bliss. It’s a water journey, but not into the heart of darkness, rather into lightness of heart.

While the nursing home scenes put these events into perspective, commenting on the process of aging and the life of the aged, Schorr’s thesis goes beyond aging to the perennial search for new horizons, the thrill (and risks) of new experience against the stultifying security of the tradition-bound. Working with minimal dialogue and an accretion of small incidents, Schorr keeps it all understated, unsentimental, and pleasingly dry. Important and thoughtful themes, which in other hands would likely have been weighty and overbearing, remain drolly deadpan in this accomplished debut film.