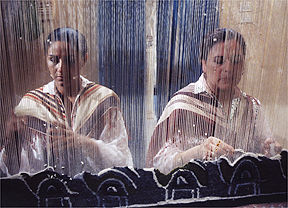 Behind the main titles of The Season of Men are the peaceful, calming sounds of waves breaking on a beach and the cries of sea gulls. On the visual surface of Moufida Tlatli’s new film, too, there is a landscape of sand and palm trees, interiors of sheltering cool from the desert sun, rich reds and ochres in the fabrics of clothing, all coming together to create a sense of languor. The film is exquisitely and thoughtfully photographed.

Against this deceptively peaceful setting, Tlatli tells the story of an extended family, locked into traditional Islamic morality and rigid social mores, resistant to change. On the island of Djerba there is little economic opportunity, so the men of the family spend most of the year in Tunis, leaving the women at home to be visited just once a year. Aicha (Rabiaa ben Abdallah) is the wife of the eldest son of the family. It is the beautiful rugs she weaves that bring her merchant husband, Said, financial success in Tunis.

But Aicha feels confined in the family compound on Djerba, where tradition makes her mother-in-law the absolute ruler of the household. She gives birth to two daughters whose arrivals are a source only of disappointment in this family. Some years later she gives birth to a son, a beautiful boy who is autistic–mute and easily upset into tantrums.Her husband wants nothing to do with the boy and blames her for his condition. Aicha pleads with him to take her with him to Tunis, but he puts her off, unwilling to break with tradition.

Aicha’s sister-in-law, Zeineb (Sabah Bouzouita), was abandoned by her husband after her marriage night. As far as her mother is concerned, the fact of her marriage sustains Zeineb’s respectability, but Zeineb is overflowing with unfulfilled desire, expressed in psychosomatic aches throughout her body.

The Season of Men begins with Aicha and her adult daughters in Tunis, a visit back to the island, and flashes back to the family history. When Aicha finally gets Said to take her to Tunis, it is disastrous for their marriage. Her daughters have grown up in a more modern world, but one is locked into a hopeless affair with a married man and the other is having sexual problems in her marriage. The restrictive demands of the old ways have taken their toll on all these women and on their men, as well.

Rabiaa ben Abdallah, as Aicha, is both luminously beautiful and profoundly sad, as her reasonable attempts to make adjustments get nowhere, and she grows to the difficult realization that she must make a major break with the family ways to find a meaningful life for herself and for her daughters, including open defiance of her mother-in-law to send her daughters to school. Sabah Bouzouita seems like a caged animal, yearning and neediness spilling out of her desperate eyes.

With a richness of incident and telling glimpses into the daily life of the island–weaving, threshing, bathing in the sea, grooming rituals–Tlatli builds an in-depth picture of the struggle between old ways and liberated expectations. She neither oversimplifies nor turns the film into a tract. Even the rigid and domineering matriarch is allowed a loving moment, if never openly expressed.

A sinuous soundtrack enhances the elegant cinematography, and together with Tlatli’s slowly paced exposition, the result is a sensuous visit that may seem exotic to westerners, but remains immediate and pertinent to lives in Tunisia (and, surely, similar societies) today.