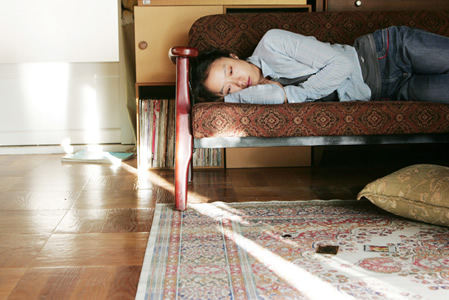 Can a movie traumatize you in a good way? I suppose The Passion of Joan of Arc does it. No less riveting than the Carl Theodor Dreyer classic, writer-director Lee Chong-dong’s Secret Sunshine pulls it off too. Furthermore, it is no exaggeration to say that Sunshine star, Jeon Do-yeon’s performance compares favorably with Maria Falconetti’s. Jeon, who won Best Actress at the Cannes Film Festival for this role, is that good.

The title, Secret Sunshine, derives from the setting – a small, conservative city in South Korea called Miryang. In Chinese, it translates to “secret sunshine.” Recent widow Lee Shin-ae (Jeon) and her young son, Jun (Seon Jeong-yeob), move from Seoul to Miryang because it is the hometown of Shin-ae’s late husband. The first resident they meet is mechanic Kim Jong-chan (Song Kang-ho), who helps them out when their car breaks down. Jong-chan is the overly helpful sort because of how important it makes him feel, not because he is naturally benevolent. This often leads Jong-chan from being helpful to being meddlesome. Not so subtly, he harbors a crush on Shin-ae, and not so subtly, she rebuffs his advances. Still, Jong-chan seems to know some one in town to recommend for any need or occasion and he frequently calls on them to help out Shin-ae.

Shin-ae opens a piano school for children and gets to know the townspeople, a gossipy bunch who are soon familiar with all her business. Pointedly, her neighborhood pharmacist evangelizes to her about God and Jesus Christ, but Shin-ae, not a believer, politely presents her own counterarguments. From here, Secret Sunshine undergoes numerous harrowing twists and turns with a character trajectory unlike anything else you’ve ever seen, it’s closest relation perhaps being Todd Haynes’ Safe. As a film from South Korea, far from indigenous for Christianity, this surprisingly turns into one of the most dramatic examinations of Christian faith put on celluloid.

Lee Chong-dong first made a splash internationally with Peppermint Candy, a film which told its story in reverse chronology much like Memento (the two films came out in the same year). Peppermint Candy was impressively incendiary, but wallowed in its protagonist’s intensity. Secret Sunshine is a more level-headed and controlled work, equally strong in passion but better focused.

The film rests first and foremost on character, and Lee establishes a strong, believable rapport between mother and son. They play their little games whether it’s her knowing how to lure him out of hiding or seeing through his fake snoring. Jeon Do-yeon has to go through every emotion in the book and she’s never less than convincing. Far less showy but contributing just as much is Korean cinema’s omnipresent Song Kang-ho, who is funny even while suppressing his usual broad comedic turns. All the characters feel thoroughly lived-in, and it’s hard to think of a false note from any of the actors in the whole movie. Lee does nothing less than bring an entire community to vivid life.

On the technical side, he delivers equally strong direction. He excitingly plays with filmic space. In a single take from inside a van, a father jumps out and retrieves his daughter. It starts the action inside, takes it outside, and then brings it back in again, all in the course of one shot.

Frequently one character, carefully composed in either the background or foreground, will observe other characters without their noticing. Jun sees his uncle talking about his late father’s infidelity, and in a hair salon, Shin-ae eavesdrops on a shop owner talking about her behind her back. Lee is always respectful of his characters and gives them distance from the camera when they need emotional remove. This makes a scene in which Shin-ae breaks down in her kitchen all the more potent in bringing home the trauma. A close-up would have been excessively and glaringly intrusive.

If Secret Sunshine has a flaw, it’s that the movie doesn’t have a real ending, but it’s also set up in such a way that it really can’t. It does feel long at 2 hours and 22 minutes, and I still didn’t want it to end. A real ending would betray the trauma Shin-ae goes through, and that will last a life time.