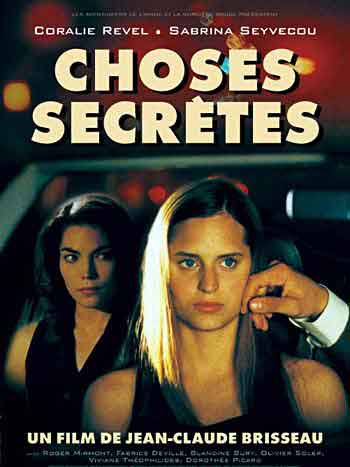 Who but the French would continue to push the envelope of sexuality in cinema? And Jean-Claude Brisseau&#146;s Secret Things is very French. Guided more by an intellectual adherence to theme than considerations of realism or naturalism, Secret Things even occasionally evokes the supernatural (an angel figure that also appears in some of his other films), though the plot can scarcely carry so much symbolic weight. Pretentious it may be, but it is also wickedly delirious and transporting. Cahiers du Cinema called it the best film of 2002 and there&#146;s at least a little merit to the claim.

For those disappointed by the intentionally frosty and remote erotica of Stanley Kubrick&#146;s Eyes Wide Shut, Brisseau provides an alternative with Secret Things. Hot and scintillating, Brisseau and his actors aren&#146;t afraid to get down and dirty. As with Y Tu Mama Tambien and Sex and Lucia, two other recent films about sex, the explicitness in Secret Things is so essential to its being that it would be pointless to try to cut it down to an R-rating.

Fresh-faced Sandrine (Sabrina Seyvecou) is a bartender in a strip club who watches Nathalie (Coralie Revel) perform her nightly act with rapt attention, but when Nathalie tries to protect Sandrine from the owner&#146;s sexual advances, both women are tossed into the street. Moving in with Nathalie, Sandrine confides that she is envious of Nathalie&#146;s exhibitionism, and Nathalie decides to open her up by having Sandrine masturbate herself to climax in front of her. Coming out of dance school, Nathalie was only able to find work as a stripper, but now she tells Sandrine of her plan to sleep her way to the top of the corporate ladder. She says she is sick of being yet another woman who is too meek to move up in the world. She teaches Sandrine how to use sex to influence others, but warns her that love is their biggest enemy.

The two start by getting lowly secretarial positions and using their physical and mental assets to manipulate their male supervisors. While Sandrine works on decent, tender family man, Delacroix (Roger Mirmont), Nathalie aims straight at the top with Christophe (Fabrice Deville), the son of the dying company owner. But Christophe and his sister, Charlotte (Blandine Bury), turn out to be far more than what Nathalie and Sandrine bargained for. When he was a child, Christophe&#146;s mother died of a heart attack while his father was away on business and Christophe spent two weeks with the decomposing corpse. Now he is an amoral Dionysian and Nietzschean Superman who carries himself like an Egyptian pharaoh wallowing in his own perceived divinity. From his mansion perch, he talks about regulating &#147;the spectacle of human destiny.&#148; Irresistible to women, he has driven several past girlfriends to suicide.

There is, however, a twist. As in Fight Club, the initial objective with which Brisseau aligns the audience is replaced with a stark ambivalence that tremendously complicates the movie. Why is the audience rooting for Sandrine to take advantage of people very much like the viewers themselves? How much does the voyeuristic intimacy with Sandrine and her body contribute to seducing the audience? Do women really want to treat sex as indifferently as many men in order to move ahead? Should all this be seen as mere fantasy given all the genre elements and the Helmut Newton-stylization or is the sex exploitative and objectifying? How much of this is Brisseau&#146;s idea of a joke? Most sex scenes in movies are kind of silly anyway, but especially so when set to powerful religious choral music by Vivaldi and Bach as it is here.

Sabrina Seyvecou has a convincing ordinary beauty that is perfect for her part; she conveys both naivete and a persuasive desire for naughtiness. She immerses herself in a fake orgasm scene that could teach Meg Ryan (When Harry Met Sally…) a thing or two. With her dark hair and piercing blue eyes, Coralie Revel is an intimidating physical presence. Her stark naked dance that opens the film is a mix of classical grace and vulgar masturbatory erotica. Both Seyvecou and Revel hurl themselves into their sex scenes with daring and vulnerable abandon. In comparison, eye candy Fabrice Deville and Blandine Bury fare less well, looking like they are competing for People magazine&#146;s sexiest list.