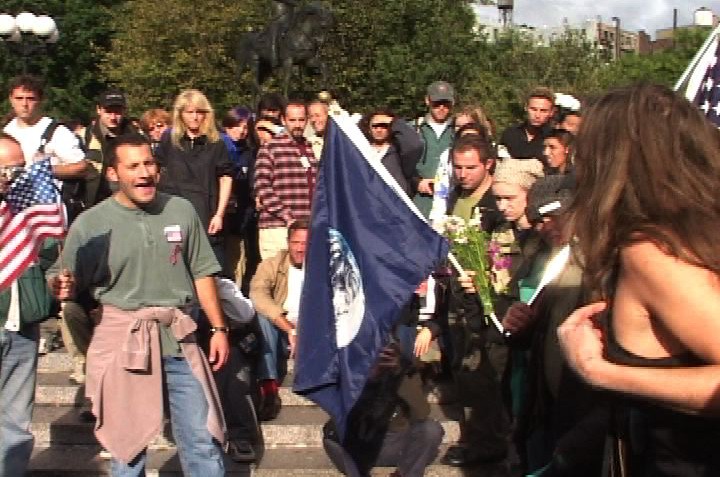 Seven Days in September is a compilation of footage of the World Trade Center terrorist attacks and the immediate aftermath in New York City. Drawing on film and video caught by both amateur and professional filmmakers, it is a workmanlike reconstruction of the events, enhanced by "talking heads" commentary by the various filmmakers themselves.

The shots of the twin towers, of the smoke and fire, of the plane slicing into the second tower, and of the subsequent collapse of the buildings have become familiar from similar footage that has been heavily exposed in the media, both at that time and since. Nonetheless, the sheer horror of the calamity doesn’t fail to provoke once again an uncanny combination of anger, awe, and overwhelming sadness as the scale of destruction and human loss are once again confronted.

What distinguishes Seven Days in September are the smaller scale moments that it captures, individual human elements within the broader sweep of events. The way that the rescue workers–police, firemen, medics–doggedly dug into their work until they fell exhausted has been shown before. But there are previously unseen shots of the crowds of local residents who gathered simply to applaud the rescue workers and thank them as they shuttled to the Chelsea Piers for respite. Ordinary folks wanting to be helpful volunteered to collect contributions, feed the rescue workers, even build wooden stretchers to carry out survivors–or remains.

On the night of the 11th, a vigil in Union Square documents the profound need of people to connect in times of crisis; staying home and watching the endless television coverage was a lonely alternative. Lighting of candles became a regular ritual, the symbolic bringing of light to fend off the darkness of confusion and despair.

Individual images cumulate to reveal the texture of experience and feeling at the time: Bill Clinton walking among the crowds offering sympathy and reassurance; shoes covered with ash abandoned in the street; a street preacher taking advantage of the moment to proselytize, seemingly without an audience; the awesome advance from the collapse of the towers, like a tidal wave or an avalanche, of the clouds of debris and smoke and soot and ash, swirled through with pieces of paper from destroyed offices.

Not all of the sequences are as successful. The comments of a couple of children, interviewed for their viewpoints, seem to reflect more what they’ve heard at home than their own thoughts. While the scale of personal losses is clear, the film doesn’t delve much into individual experiences of loss of loved ones. Perhaps the latter is more than should be expected of one film.

The best scene in the film, once again in Union Square, several days later, shows a crowd gathered, heatedly debating what the appropriate response to the attacks should be. Hawks and doves emotionally state their cases and anger levels escalate. Just when things seem ready to erupt, a woman who has argued for peace cries out plaintively, "What do we do with our rage?" It’s what they all have in common at the moment and, finding that,the opposing sides embrace. A wonderful, unexpected, very New York moment.