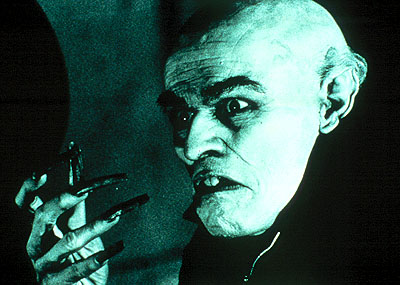 Moviegoers have been smacking their lips this year for E. Elias Merhige&#146;s Shadow of the Vampire, if only because of its opium-dream casting: John Malkovich as the great German director F.W. Murnau and Willem Dafoe as the actor Max Schreck. Throw in the fact that Vampire is about the making of Nosferatu, Murnau&#146;s 1922 version of Bram Stoker&#146;s Dracula that&#146;s still one of the peaks in both silent cinema and the history of horror films. And top it off with the movie&#146;s conceit that the mysterious Schreck, whom Murnau cast as his bloodthirsty count, was an actual vampire whose legendary performance in Nosferatu was motivated by Murnau&#146;s promise of human blood. Taken together, it&#146;s an irresistible web of ideas. Shadow of the Vampire isn&#146;t quite the phantasmagoric ride one expects from a set-up like that, but it&#146;s still a unique and richly funny movie that should arouse film buffs the world over. And it contains at least one indisputable treasure: Willem Dafoe&#146;s performance as Shreck&#151;one of the sleekest, most fully imagined impersonations of a real figure that the movies have ever seen.

Set in 1921, Vampire opens just as Murnau is moving his production company to Czechoslovakia for location shooting on Nosferatu. His collaborators are eager to meet the mysterious actor whom he&#146;s selected to play Count Orlock (legal hassles with the Stoker estate forced Murnau to change the names in his work), but the director puts off their inquiries until the night of Schreck&#146;s first scene. When Schreck finally appears, his grotesque features and aberrant behavior distress everyone on the set, especially leading man Gustav von Wangerheim (Eddie Izzard). (The names of all of Vampire&#146;s principals are taken from their real-life counterparts.) Murnau explains that because Schreck is a new type of actor&#151;a Method actor&#151;he won&#146;t be seen except at night and in full costume. Even when mysterious ailments befall various members of the company, Murnau remains fixed on finishing his picture. For in his film Murnau is trying to capture greatness like a firefly, and his drive for artistic perfection has made him willing to cut all kinds of corners. In a series of scenes between Murnau and Schreck that resemble Faustian dialogues, Murnau promises Schreck a special bonus if he finishes the movie to the director&#146;s satisfaction: the right to drain the lifeblood from Nosferatu&#146;s leading lady, Greta Schroeder (Catherine McCormack).

Steven Katz&#146;s screenplay is at its most serious, and its least interesting, when it becomes a disquisition on the moral limits applicable to artists when they&#146;re in the process of producing a great work. It&#146;s a respectable topic for discussion, but Katz draws blithe parallels between the immortality that both artist and monster aspire to; Schreck is less vampire than strawman in these scenes. The critic Robin Wood has written that, in contrast to the Surrealists, the German Expressionists viewed the repression of the unconscious as a necessity, its release as a cataclysm. Shadow of the Vampire has taken this view too much to heart. The bonds between creativity and addiction are too provocative for schematic debate, for what ultimately feels like a warning against &#147;going too far.&#148; In a story like this (and especially with this cast), &#147;too far&#148; is precisely where we want to go; we want all of the wildness and exhilaration that the bloody-minded count can dish out.

It&#146;s an odd failing in a picture that does everything else so well. Shadow of the Vampire is at its loosest when it&#146;s lampooning, rather than probing, the creative ego. &#147;I&#146;d like some makeup,&#148; snarls Schreck, when makeup is the last thing that can help this ghastly demon. (It&#146;s not just the performers who have monstrous outward faces; Murnau and cameraman Fritz Wagner (Cary Elwes) are just as theatrical in the expression of their appetites.) Katz has written some marvelous scenes, as when Schreck, keening with hunger, asks Murnau if the movie really needs to keep its writer around, or the hilarious and melancholy midnight interrogation session in which the film&#146;s producer and writer try to get a fix on their gnomish star. (When the filmmakers ask Schreck for his opinion of Stoker&#146;s creation, the little monster finally comes out with, &#147;It made me sad because the man had no servants.&#148;)

Instead of relying on cobwebbed mansions or the other trappings of horror films, Vampire&#146;s strangeness comes from its sense of the past, and its immersion in the history of filmmaking. It&#146;s thrilling to see Murnau and his assistants, clad in lab-coats and goggles as if they&#146;re handling plutonium, working their hand-cranked cameras to film scenes that we recall from the real Nosferatu&#151;it&#146;s a sight that fills a craving you didn&#146;t even know you had. At one point Murnau refers to film as &#147;our very own painting on our very own cave,&#148; and that may be how directors think of their pictures over time. But the care that Merhige takes in re-creating Murnau&#146;s dedication is touching; he&#146;s multiplied our appreciation for Nosferatu, and the history of film, by showing it to us in a mirror.

The casting of Malkovich and Dafoe was a true brainstorm, as both stars bring an esoteric approach to their craft and charge their performances with perverse eroticism. Malkovich plays Murnau as a block of Prussian ice that&#146;s constantly being melted by the creative volcano that&#146;s boiling inside him. One of the keys in Murnau&#146;s personality is his casual sexual cruelty, and when Malkovich purrs, &#147;Niiice, pussy,&#148; while directing Greta to pet a cat, you can&#146;t quite hear the comma in between the two words. When Murnau is directing his movie, the utter conviction with which Malkovich tells his actors what to do, and his ingenious efforts to coax spontaneity from them, feel as revealing of his acting aesthetic as the negative example of the lifeless &#147;Topo Gigio&#148; walk that he made the marionette perform in Being John Malkovich.

But as good as Malkovich is, Shadow of the Vampire is Willem Dafoe&#146;s movie, pure and simple. With his rodent&#146;s teeth, pointed ears, and round, yellow skull, he looks like a syphilitic monk. He has Schreck&#146;s famous corpse-like posture&#151;the squared-off shoulders, the hands lying flat against his thighs&#151;down pat, and when stimulated he gently clicks his long untrimmed nails against each other. But Dafoe gives a real performance beneath all the makeup; he&#146;s never filled out a part the way he has this decadent prima donna, with his unsavory tantrums and handicapped sense of courtliness. He&#146;s had to invent speech patterns for Schreck, and invested him with a sibilant, nearly slobbering hiss that&#146;s simultaneously carnal, comic, and revolting. It&#146;s a living piece of work whose brilliance doesn&#146;t wear away with thinking about it.

Of all the movies ever made about the art of filmmaking, Shadow of the Vampire feels closest in spirit to Sunset Boulevard&#151;they seem to have sprung from the same gothic nuthouse, both shine with love for their own medium, and both take a guess at the secret life of icons. Shadow of the Vampire is an original and memorable work even if it doesn&#146;t quite pull us over the precipice. It may refuse to make us insane, but it&#146;s still a wet dream for movie-lovers.

(21825)
$3.99 (as of January 21, 2021 - More infoProduct prices and availability are accurate as of the date/time indicated and are subject to change. Any price and availability information displayed on [relevant Amazon Site(s), as applicable] at the time of purchase will apply to the purchase of this product.)

(16)
$7.99 (as of January 21, 2021 - More infoProduct prices and availability are accurate as of the date/time indicated and are subject to change. Any price and availability information displayed on [relevant Amazon Site(s), as applicable] at the time of purchase will apply to the purchase of this product.)
related posts