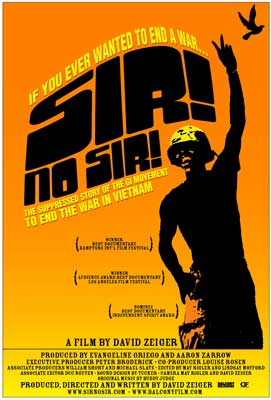 A funny thing happened on America&#146;s fast dash exit out of Vietnam in 1975. The war suddenly became a non-topic. In the perhaps stunned silence that followed the first war the United States could not categorically claim to have won, historical revisionism began immediately. As the U.S. currently engages in another war many view as another Vietnam, the time has come to take a long, hard look back. David Ziegler has created a "must-see" documentary which seeks to return to the historical record the pivotal story of the GI anti-war movement during the Vietnam War.

The resistance movement began very small, but rapidly exploded. How powerful a force inside the U.S. military they became seems unimaginable today. As individual GIs began to realize they were being ordered to participate in patently unethical murder and mayhem, more and more rank-and-file soldiers began to question and then refused to follow orders. For example, because the progress of the war was measured in daily body counts, many GIs soon found they were being ordered to kill indiscriminately, to the sole end of having higher and higher (dead) body count numbers. Some balked in horror at being compelled to massacre innocent woman and children. In the present Iraqi war such "collateral damage" is again blithely dismissed, by government officials and "embedded" journalists alike, and blame for publicly embarrassing atrocities, such as My Lai (then) and Abu Ghraib (now) is scapegoated onto low-ranking officers.

Drawing upon archival news footage, previously unseen home movies (super-8mm and 16 mm), an archive of over 200 GI-generated anti-war underground periodicals, and extensive then-and-now interview footage of active-duty antiwar activists, Ziegler demonstrates the material fact and scope of the backlash. Over half a millions GIs deserted. The mutinous strategy of fragging (ambushing superior officers with fragmenting grenades) became widespread on the ground in Vietnam. Jane Fonda and Donald Sutherland&#146;s antiwar stage review "FTA" became very popular, playing off-base near US military encampments around the world. And GI coffeehouses sprang up off-base all over the U.S., as places where, off-duty, disaffected GIs could meet and communicate.

Ziegler interviews a number of those prominent in the GI antiwar movement. Among them are Donald Duncan, a member of the Green Berets, who resigned in protest in 1966 and whose article published in Ramparts magazine helped transform individual resistance into a GI movement. Howard Levy was a dermatologist drafted in the early 1960s to teach simple treatments of skin conditions to GIs. He eventually refused to serve, was court-martialed and spent three years in prison. Keith Mather, among the "Nine for Peace," was one of the soldiers who took sanctuary in a San Francisco church. Once incarcerated in the Presidio stockade he helped organize a sit-down protest. Finding himself thereupon threatened with the death penalty on charges of mutiny, he escaped and fled to Canada where he lived for 18 years.

Near the end of the documentary, Ziegler turns his attention to the myth and reality of the "spat upon returning Vietnam vet" by interviewing Vietnam vet Jerry Lembcke. After military duty Lembcke trained as a sociologist and investigated but could find no actual cases of GIs being spit upon by antiwar protesters. His research was published as The Spitting Image. Ziegler deftly juxtaposes this reportage with clips from Rambo, allowing the process and product of revisionism to speak for itself.