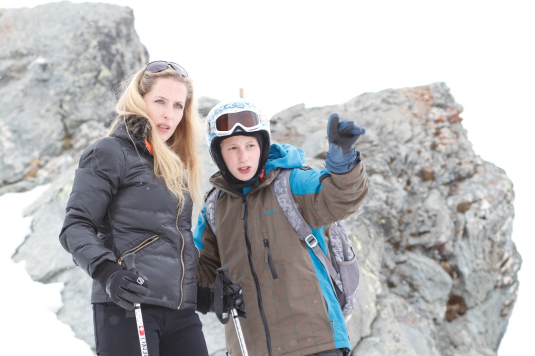 Gillian Anderson as the sister in Ursula Meier’s film

French-Swiss director Ursula Meier drew notice and acclaim from an international audience in 2008 with her feature film directorial debut of “Home” starring Isabel Huppert. Her latest film is “Sister.” This is a small story about a young boy, Simon, who steals from locals and tourist of a nearby ski resort. His motive is not just for himself, but to help with living expenses for his unreliable older sister who would rather spend her time with worthless guy friends than looking for dependable work or noticing her brother’s whereabouts.

Taking advantage of high ski tourist season, by day Simon treks to the hills to gather loot from unsuspecting skiers. He swoops in on expensive equipment, gathers it up and then schleps it home to sell off to neighbors, friends and strangers. This behavior seems believable and somewhat understandable because of the young lead actor, Kacey Mottet Klein. He doesn’t seem like a thug in the making, but rather a likable kid in unfortunate life circumstances who’s just trying to get by and help pay the rent and put food on the table.

While “Sister” is not at the same level as “Home,” it is impressive and should solidify Meier as a writer-director of noteworthy talents and one to watch. It is also visually engaging, thanks to experienced cinematographer Agnes Goddard who is known for her collaboration with Claire Denis (“Friday Night” is an outstanding example of her photographic work with Denis). “Sister” won the Silver Bear Award at the 62nd Berlin International Film Festival and has been selected as the Swiss entry for the Best Foreign Language Oscar at the 85th Academy Awards.