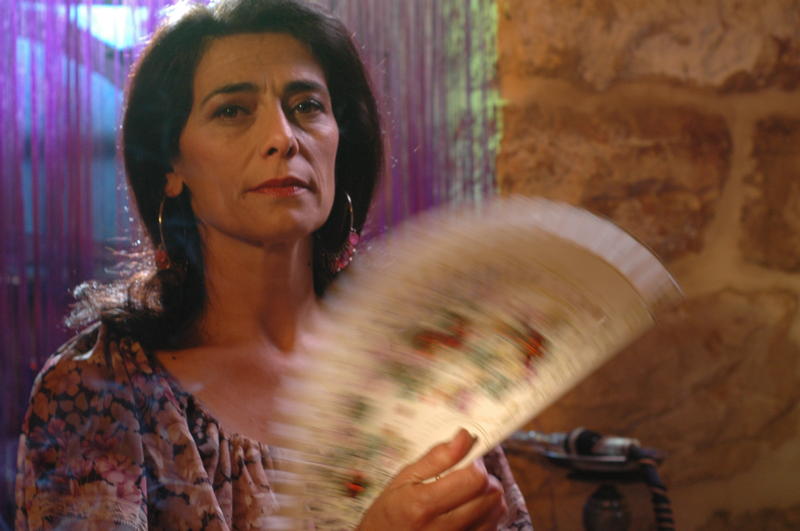 6 Films from the Arab Film Festival

from Pomegranates and Myrrh

It’s often said that D.W. Griffith invented the language of film, and that little has changed since he did that. Sure, we’ve got CGI and F/X galore now, but as the song in Michael Curtiz’s 1942 film CASABLANCA says ” The fundamental things apply/ As time goes by. “

Palestinian director Najwa Najjar’s multi-award-winning first fiction feature POMEGRANATES AND MYRRH, which opened this year’s 13th annual Arab Film Fetival at San Francisco’s Castro Theatre October 15th, puts the visual language Griffith invented to good use. Its stark look — several scenes seem to have been shot in natural or near natural light, with lots of close-ups and few master shots, even in its widescreen 1:85: 1 screen ratio —  put the viewer right inside her story of a middle class land owning family in Ramallah, in occupied Palestine. Occupied because despite the fact that Israel seized the West Bank of the Jordan River in the 5-10 June 1967 6 Day War — an act of aggression wrongly reported and endlessly glorified which  UN Security Council Resolution 242 passed 22 June 1967 which stipulates the ” withdrawal of Israeli forces from territories occupied in the recent conflict. ” But Israel has never done that, choosing instead to install a brutal military occupation 1o times longer than the Second World War, which has constricted every kind of movement in what remains of historic Palestine. Najjar’s film is an intimate account of what happens when these facts on the ground determine every aspect of one’s life, and her visual style is an analogue to this constriction. She takes the most basic element of Griffith’s language — rhythm — as the driving force for telling her story of a lovely just married young Palestinian woman Kamar ( Yasmine Al Masri ), whose only escape is through dance, and her images, whether staccato or fluid, reflect its pulse.

Kamar’s passion for dance is briefly interrupted when her husband Ziad ( Ashraf Farah ) gets arrested by the Israeli Defense Forces ( IDF ) while he and his extended family are having dinner next to their olive groves in harvest time at dusk. The IDF put Ziad in “administrative detention ” — an Orwellian term for imprisonment without real charges and trial. Kamar’s devastated. But then a handsome choreographer named Kias ( Ali Suleiman ) arrives with new ideas which theatens the class’s resident choreographer Odeh ( Walid Abdul Sallam ). Kamar may want Kias — it’s never made unambiguously explicit — but knows she’s expected to play the role of the long suffering prisoner’s wife, and adultery’s out of the question. Najjar lets everything play in the most natural way. This isn’t an overheated telenovela with slammed doors and crying fits, but human behavior embodied in a delicate dance of gesture between the 3 central characters, with an enormously moving scene where Kamar presses her hand against the visitor’s grille in the prison — and Ziad smells the sweet scent of his olives which are his land, his life.

Najjar gets superlative performances from the entire cast, and the 2 Umms ( Arabic for mother ) — Ziad ( Samia Kuzmoz ) and Habib ( Kiam Abbas ) with their respectively warm and resolute faces – give the film a bittersweet edge. The controversial anti-Zionist lawyer Lea Tsemel — she saw what Israel’s actions in the ’67 War would mean for the Palestinians in ’67 and after — who serves as the family’s lawyer , projects fierce compassion in her 1 brief scene. Ramallah’s Fanon  ensemble play the members of Kamar’s dance class, and give a spectacular performance of a piece called POMEGRANATES AND MYRRH as the film’s climax which proves that joy flower even in harsh political climates.

Annemarie Jacir’s first fiction feature — her initial films like Najjar’s were documetaries — SALT OF THIS SEA is a completely different yet complementary take on the occupation of Palestine seen through the eyes of Souraya ( Suheir Hammad ) , a Palestinian working class woman from Sunset Park, Brooklyn, who makes her first visit to Palestine / Israel to get the funds from her grandfather’s bank account frozen in the 1948 War which established the Jews only Israeli state and which effectively began the ethnic cleansing of Palestine of her indigenous people — about 750,000 fled their homes that year, with about 250, 000 during  and after the ’67 War, their descendants now numbering some 6 plus million in Israel, the West Bank, Gaza, Lebanon, Jordan, and the diaspora. Some have called Jacir’s story and its execution didactic, but this misses the point because her tactic of telling the story through Souraya, who has no idea of what’s going on in her ancestral land , opens the window on a subject most people in the US don’t know about, and if they do, don’t want to face. The humiliation Souraya receives from the ” security guards” at Ben Gurion Airport in Tel Aviv are but the start of her troubles, though her stay in Ramallah , where she meets a handsome and equally tall young Palestinian man Emad,  ( Saleh Bakri ) , who wants to leave — “They won ” — he tells her in a quietly powerful scene on a hillside facing Jews only settlements on stolen Arab land, is hardly trouble free. She encounters several checkpoints, which number in the hundreds in the chopped up West Bank, and gets the cold shoulder from 2 bankers — I Brit, 1 Palestinian — when she tries to get  her grandfather’s money back. But things turn around when she and Emad decide to rob a bank to get her grandfather’s savings, and fully armed, their faces covered in TV terrorist kaffiyahs, they succeed, and escape in a getaway car with their friend Marwan ( Riad Ideis ). It’s brilliantly staged, shot by cinematographer Benoit Chamaillard, and cut by Michele Hubinon, and it’s surprising, tense, and hilarious. The trio’s experiences in Israel show what it’s like to be an outsider in your own country, which is something every Palestinian there or in the diaspora feels, or knows about. Jacir dramatizes that existential problem in a fresh, vigorous, and sometimes funny way. And  her film, though its aspect ratio is smaller than Najjar’s — 1: 66: 1 —  is often filled with miraculous Mediterranean light — can feel just as constricted as Najjar’s often night located images, as in an especially striking scene where several bound at IDF gunpoint Palestinian young men are seen screen left on a hilltop in light of day, is as dark as Najjar’s constricted night located images.
Jacir’s images are perfectly though not academically composed, beautifully lit, and seamlessly joined. And all the performances , though delicately shaded, make their salient points. The film also benefits from a spare, evocative score by Jacir’s house composer  Kamran Rastegar. ” I didn’t want to make a political film but everything in Palestine is political, ” Jacir has noted, and her film, despite its many critics, foregrounds all  the major Palestinian issues in a continuously evolving narrative frame.

The politics in Moroccan director Nour-Eddine Lakhmari’s CASANEGRA aren’t overt, but the economic realities of the kingdom do seem to detemine the fates of  the two cute hapless crooks in the film — Karim ( Anas Elbaz ) and Adil ( Omar Lofti ) whose bunglings are as funny as the cluelessly hilarious characters in the F/X channel’s deliriously over the top IT’S ALWAYS SUNNY IN PHILDELPHIA.  Life’s expensive in Lakhamari’s stunning widescreen view — 2: 35: 1 — of Casablanca today, and even dire poverty looks somehow seductive in the brilliantly focussed eye of Luca Coassin’s justly awarded cinematography which gets lots of mileage from frequently wide angle long takes which seem to occupy real time. Americans are frequently wary of high style — painter Alex Katz’s work is routinely dismissed as shallow and lots of American critics said Michael Mann’s PUBLIC ENEMIES couldn’t possibly be a masterpeice because it was so stylish — but form and content always go hand in hand and that’s certainly the case here. Richard Horowitz’s  drives and supports in equal measure, and all the supporting peformances — not least Mohammed Benbrahim as Adil and Karim’s mobster mentor  — though his pooch whose has his own mongorammed seatblet was my fave.

Lebanese director Marc Abi Rached’s first feature HELP, though well-executed visually, provided  precious little backstory for its wafer thin characters, and you’d never know from the film that the ragamuffin teenage character Ali ( Hussein Mattouk  who  lives in what looks like a VW bus in a shabby part of Beirut is seeking a mother figure in the hooker Souraya ( Joanna Andros ), and the bits of gay club life, including snorting coke, failed to shock.  Rached’s script is unfortunately barely there.

Fadi Hindash’s  documentary NOT QUITE THE TALIBAN, which purports to be an expose of hypocrisy of the Muslim world — especially in Dubai where it’s set — ends up being an exercise in monumental self-absorption, which plays like The Real Housewives of Dubai. But Daniele Salaris’ documentaryTHE BEIRUT APARTMENT, though 2o minutes shorter, was a focussed and to the point series of interviews with 5 gay characters who define their sense of being different and or rejected in Arab, and specifically Lebanese culture which, as the pert lesbian shrink Maha says, defines itself according to the confessional make-up of its culture — you’re Maronite Christian, or Druze, or Shia, or Suuni. But the most interesting character is Rachid, who struggles manfully to reconcile his gayness with his Muslim faith, which seems both abiding and deep. And I don’t think he just thinks about shopping. Or as I said to a Muslim Palestinian friend of mine who’s planning to get engaged to and marry a girl in Jordan who lamented American culture. ” It’s me, me , and more me. ” Thank God 4 of the 6 films I managed to catch in this always provocative offering of films from the Middle East and North Africa were a little, and in some ways alot more than that.