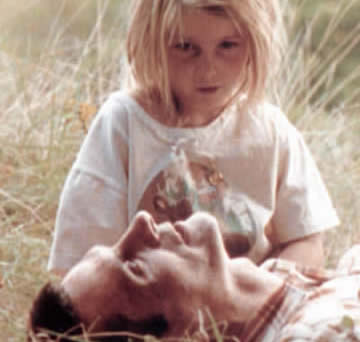 Skin of Man, Heart of Beast wears its title on its sleeve. Three brothers, who live with their widowed elderly mother and the oldest brother&#146;s two children, regularly erupt into displays of uncontrolled, spontaneous violence, the kind Martin Scorsese has made a career of depicting.

The catalyst to tragedy is the return of middle brother Coco (Bernard Blancan) after a mysterious 15-year absence. He claims he joined the army and then the French Foreign Legion, but he shows no signs of knowing what he is talking about.Oldest brother, Franky (Serge Riaboukine), an oafish lout, has just been suspended from the police force. Along with suffering from wild mood swings, Franky&#146;s womanizing and general sadism toward women no doubt led to his wife leaving him, even abandoning their two daughters. The youngest brother, clean-cut, handsome Alex (Pascal Cervo), works at a bar that also serves as a club for prostitutes.Despite ascending the ladder toward ill-gotten material success, Alex at least appears to maintain an essential honor and decency.

Coco&#146;s mother, Marthe (Maaike Jansen), is happy about his return, and Franky&#146;s innocent 5-year old daughter, Aurelie (Cathy Hinderchild) embraces him as well. Only Aurelie&#146;s older teenage sister, the impertinent Christelle (Virginie Guinand), is suspicious and distrustful of Coco. Christelle tells Aurelie that she dreamed Coco killed them both and cooked their remains for the rest of the family to eat. Her foreshadowing proves apt as Coco&#146;s grave mental imbalances gradually come to the fore.

Skin of Man, Heart of Beast is an ambitious debut film for director and co-writer Helene Angel. She likes to keep the screen fussy with activity and she has a good eye for composition. However, Angel&#146;s main problem, not uncommon for first time filmmakers, is that she just tries too hard. Despite her rather realist style of filmmaking, the movie acts as an allegory for masculine violence.Angel does little real exploration of cause and effect, instead just dropping little hints &#150; the Algerian War as shared national trauma, aggression as a front for insecurities, sons taking after their late brutal father. Character psychology is opaque, and without it, the characters are only servants to the simplistic message that men are at heart, irredeemably violent animals.

Angel gets some striking performances from her cast. Blancan as Coco is disturbing in his passivity. His droopy shoulders, rotted teeth, and pockmarked face is contrasted by hair that appears to have the texture of velvet.Gaunt and awkward, Blancan resembles nothing less than a walking corpse.On the opposite end of the spectrum, Cathy Hinderchild as Aurelie is beyond adorable. She possesses the kind of face that she could be wearing when she is a grandmother, a la Lillian Gish. Angel plays up her cuteness excessively, but Hinderchild never appears self-conscious. Burly Riaboukine plays Franky as clumsy and loud, always with rage burning underneath, but capable of momentary tenderness as when he relates the story of their father&#146;s suicide to Alex. With an obvious rapport with her actors and a striking style behind the camera, Helene Angel is definitely a director to watch..